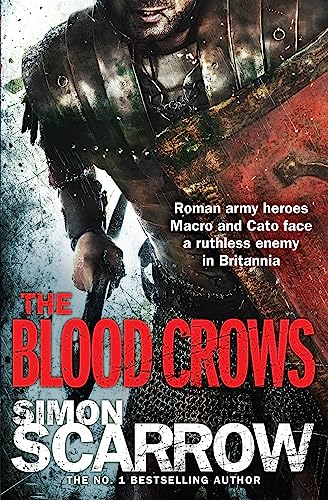 The Blood Crows
by Simon Scarrow

The Blood Crows by Simon Scarrow

THE BLOOD CROWS is the unputdownable twelfth novel in Simon Scarrow's bestselling Eagles of the Empire series. A must read for fans of Bernard Cornwell. Praise for Simon Scarrow's gripping novels: 'Ferocious and compelling' Daily Express

Britannia, AD 51. For nearly a decade, the Roman Empire has fought to assert its hold over Britannia. But relentless opposition from native tribes led by the fanatical King Caratacus threatens to destroy everything.

Prefect Cato and Centurion Macro are dispatched from Rome to aid the campaign. Placed in command of an outpost in the remote western mountains, they face a challenge even more deadly than the unremitting attacks of barbarian forces. For they must wrench control of the fort from Centurion Quertus, a man who wages a savage personal war and inspires a loyalty in his men above their bond with Rome.

With dangerous enemies on both sides, Cato and Macro face the fight of their lives to bring peace to the most perilous frontier in Europe.

Praise for Simon Scarrow's novels: 'I don't need this kind of competition... it's a great read' * Bernard Cornwell *
Gripping... ferocious and compelling, it is a story of blood, romance and sacrifice * Daily Express *
A new book in Simon Scarrow's series about the Roman army is always a joy * The Times *
An engrossing storyline, full of teeth-clenching battles, political machinations, treachery, honour, love and death... More, please! * Elizabeth Chadwick *
A satisfyingly bloodthirsty, bawdy romp...perfect for Bernard Cornwell addicts who will relish its historical detail and fast-paced action. Storming stuff * Good Book Guide *
A good, uncomplicated, rip-roaring read * Mail on Sunday *
Scarrow's [novels] rank with the best * Independent *
[Simon Scarrow] blends together historical facts and characters to create a book that simply cannot be put down... Highly recommended * Historical Novels Review *

GOR005732578
The Blood Crows by Simon Scarrow
Simon Scarrow
Used - Very Good
Paperback
Headline Publishing Group
2014-05-08
400
075535382X
9780755353828
N/A
Book picture is for illustrative purposes only, actual binding, cover or edition may vary.
This is a used book - there is no escaping the fact it has been read by someone else and it will show signs of wear and previous use. Overall we expect it to be in very good condition, but if you are not entirely satisfied please get in touch with us.