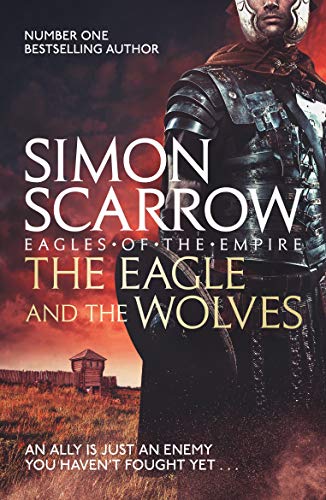 The Eagle and the Wolves (Eagles of the Empire 4) Summary

THE EAGLE AND THE WOLVES is the gripping fourth novel in Simon Scarrow's bestselling Eagles of the Empire series. Perfect for fans of Bernard Cornwell and Conn Iggulden. 'A new book in Simon Scarrow's long-running series about the Roman army is always a joy' The Times

Britannia, AD 44. Occupation is never easy. The enemy is butchering their supply convoys, their garrison town is starving and the truce with the locals is uneasy at best. Young Cato, newly promoted, and veteran centurion Macro are ordered to train the Wolves and the Boars, two cohorts of barbarian Britons, and introduce them to the brutal drills of the Roman Imperial Army. Macro is confident they'll win the natives over, but Cato worries about putting weapons into the hands of potential rebels.

Ultimately, only one thing matters: is there a difference between the enemy at their gates, and the allies in their own camp?

The Eagle and the Wolves (Eagles of the Empire 4) Reviews

Simon Scarrow is a Sunday Times No. 1 bestselling author. His many successful books include his Eagles of the Empire novels featuring Roman soldiers Macro and Cato, most recently DAY OF THE CAESARS, INVICTUS, BRITANNIA and BROTHERS IN BLOOD, as well as HEARTS OF STONE, set in Greece during the Second World War, SWORD AND SCIMITAR, about the 1565 Siege of Malta, and a quartet about Wellington and Napoleon including the No. 1 Sunday Times bestseller THE FIELDS OF DEATH. He is the author with T. J. Andrews of the novels ARENA and INVADER.

GOR001336744
The Eagle and the Wolves (Eagles of the Empire 4) by Simon Scarrow
Simon Scarrow
Eagle
Used - Very Good
Paperback
Headline Publishing Group
2008-11-13
448
0755349989
9780755349982
N/A
Book picture is for illustrative purposes only, actual binding, cover or edition may vary.
This is a used book - there is no escaping the fact it has been read by someone else and it will show signs of wear and previous use. Overall we expect it to be in very good condition, but if you are not entirely satisfied please get in touch with us.