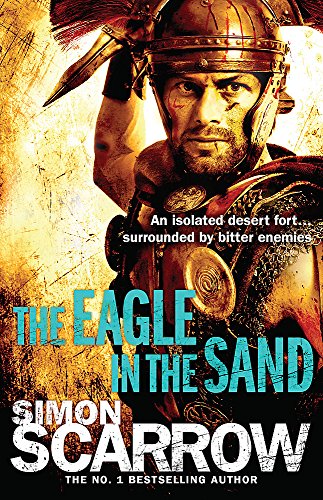 The Eagle In The Sand (Eagles of the Empire 7) Summary

THE EAGLE IN THE SAND is the action-packed seventh novel in Simon Scarrow's bestselling Eagles of the Empire series. Essential reading for fans of Bernard Cornwell. 'Scarrow's [novels] rank with the best' Independent

Judaea in AD 46. Roman centurions Cato and Macro have been posted to Judaea for a 'hearts and minds' operation. The Empire needs to win over the locals after some of their religious figures have started revolts - and since the Romans crucified the last charismatic Judaean leader, the natives' rebellions have become bolder.

Not only are these small villages causing trouble, but there are also thousands of Parthians eager to fight Rome. With the threat of suicide attacks and even all-out war, Cato and Macro have their peace-keeping work cut out...

The Eagle In The Sand (Eagles of the Empire 7) Reviews

Praise for Simon Scarrow: 'I really don't need this kind of competition... It's a great read' -- Bernard Cornwell
Gripping... ferocious and compelling, it is a story of blood, romance and sacrifice * Daily Express *
A new book in Simon Scarrow's series about the Roman army is always a joy * The Times *
A satisfyingly bloodthirsty, bawdy romp...perfect for Bernard Cornwell addicts who will relish its historical detail and fast-paced action. Storming stuff * Good Book Guide *
Scarrow's [novels] rank with the best * Independent *
Rollicking good fun * Mail on Sunday *
[Simon Scarrow] blends together historical facts and characters to create a book that simply cannot be put down... Highly recommended * Historical Novels Review *

GOR001467436
The Eagle In The Sand (Eagles of the Empire 7) by Simon Scarrow
Simon Scarrow
Eagle
Used - Very Good
Paperback
Headline Publishing Group
2008-12-11
352
0755350014
9780755350018
N/A
Book picture is for illustrative purposes only, actual binding, cover or edition may vary.
This is a used book - there is no escaping the fact it has been read by someone else and it will show signs of wear and previous use. Overall we expect it to be in very good condition, but if you are not entirely satisfied please get in touch with us.