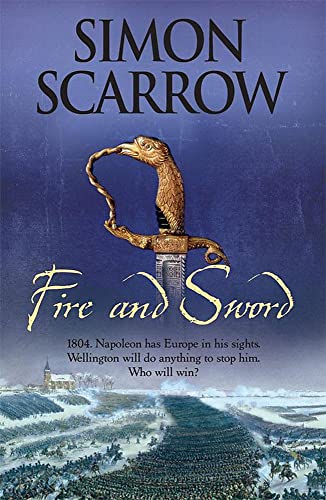 Fire and Sword (Wellington and Napoleon 3)
by Simon Scarrow

Fire and Sword (Wellington and Napoleon 3) by Simon Scarrow

FIRE AND SWORD is the unputdownable third novel in Simon Scarrow's bestselling Wellington and Napoleon Quartet. A must read for fans of Robert Harris.

1804. Napoleon Bonaparte is Emperor of France, his ultimate aim: to rule Europe. After defeat at the Battle of Trafalgar, he wins a glorious victory against Austria at Austerlitz. He then deposes the Spanish king and places his own brother on the throne. But he is yet to triumph over his most hated enemy: Great Britain.

Arthur Wellesley (the future Duke of Wellington) throws himself into the British campaign in Europe. After glory in Portugal, he commands the army in a series of triumphant battles across Spain. For those living reluctantly under French rule, his victories suggest that Napoleon's progress is not inexorable: freedom can be restored...

'One of history's most fascinating adversarial pairings is that of Napoleon and Wellington, and Simon Scarrow's quartet of books, of which this is the third, offer a vivid description of the two lives in tandem... The last book in the quartet cannot come quickly enough' * Daily Mail *
'Scarrow provides a thrilling tale that makes the journey well worthwhile' * Good Reading, Australia *
'A splendidly informative, vivid and absorbing historical novel' * The Witness, Australia *

Simon Scarrow is a Sunday Times No. 1 bestselling author. His many successful books include his Eagles of the Empire novels featuring Roman soldiers Macro and Cato, most recently DAY OF THE CAESARS, INVICTUS, BRITANNIA and BROTHERS IN BLOOD, as well as HEARTS OF STONE, set in Greece during the Second World War, SWORD AND SCIMITAR, about the 1565 Siege of Malta, and a quartet about Wellington and Napoleon including the No. 1 Sunday Times bestseller THE FIELDS OF DEATH. He is the author with T. J. Andrews of the novels ARENA and INVADER.

GOR001234699
Fire and Sword (Wellington and Napoleon 3) by Simon Scarrow
Simon Scarrow
The Wellington and Napoleon Quartet
Used - Very Good
Paperback
Headline Publishing Group
2009-06-11
672
0755324382
9780755324385
N/A
Book picture is for illustrative purposes only, actual binding, cover or edition may vary.
This is a used book - there is no escaping the fact it has been read by someone else and it will show signs of wear and previous use. Overall we expect it to be in very good condition, but if you are not entirely satisfied please get in touch with us.