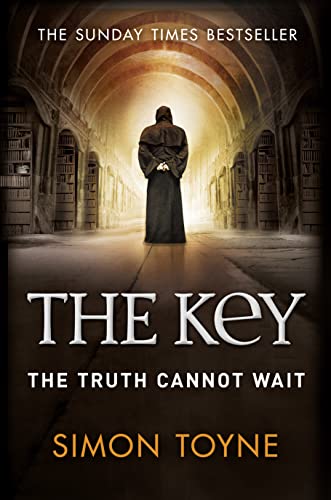 The Key
by Simon Toyne

Conspiracy thrillers don't come any bigger or better than THE KEY - from the author of the bestselling thriller debut of 2011, SANCTUS: `Plenty of action, plenty of intrigue and wonderfully imaginative. The sort of novel to devour in one sitting' Kate Mosse.

The Key by Simon Toyne

Conspiracy thrillers don't come any bigger or better than THE KEY - from the author of the bestselling thriller debut of 2011, SANCTUS: `Plenty of action, plenty of intrigue and wonderfully imaginative. The sort of novel to devour in one sitting' Kate Mosse.

Hounded. Haunted. Hunted. She is the most important person in the world. She is The Key.

In the ancient Turkish city of Ruin, American journalist Liv Adamsen lies in an isolation ward staring at walls as blank as her memory.

She knows she entered the monumental Citadel at the heart of Ruin but can remember only darkness. Something strange is stirring within her, whispering that she is `the key'. But the key to what?

For the Ghost, a mercenary operating in the Syrian Desert, Liv could unlock one of mankind's most potent secrets. For the brotherhood in the Citadel - now cursed by a terrible plague - her return is the only way to ensure their survival. And for a powerful faction in Rome, she threatens the very future of the Catholic Church.

Hunted across continents and caught up in events that defy explanation, Liv turns to the only person she trusts - a charity worker named Gabriel Mann. Together their paths lead to a shocking discovery - one that will tear them apart and change the world forever...

Praise for THE KEY:
`Among the best current thrillers'
SUNDAY EXPRESS

`A cool, confident debut ... with pace, grace and a keen eye for cinematic effect'
DAILY TELEGRAPH

`Intriguing and engaging ... Relentless pace. An exciting and interesting read. I look forward to returning to Ruin, where there are plenty of stories waiting to be told'
THE SUN

`High concept, debut conspiracy thrillers don't come with higher expectations than this. Hard to think of it as a debut, better to think of it as the beginning of a massive new adventure, and a so-long to Dan Brown'
MIRROR

'A fast moving, thoroughly enjoyable, adventure - plenty of action, plenty of intrigue and a wonderfully imaginative reinterpretation of a slice of religious history. The sort of novel to devour in one sitting'
KATE MOSSE

In 2007 Simon Toyne quit his job and moved to France to fulfil a long-held desire to write a thriller. After a sleepless night crossing the channel, he and his family abandoned a planned eight-hour drive to their new home and limped instead to the city of Rouen. It was the sight of the sharp spire of Rouen Cathedral piercing the pre-dawn sky that gave birth to the fiction Citadel of SANCTUS.

SANCTUS, his first novel, became an immediate bestseller. To date it has been translated into 23 languages and published in 40 countries.

GOR004344191
The Key by Simon Toyne
Simon Toyne
Used - Very Good
Paperback
HarperCollins Publishers
2012-11-22
480
0007391625
9780007391622
N/A
Book picture is for illustrative purposes only, actual binding, cover or edition may vary.
This is a used book - there is no escaping the fact it has been read by someone else and it will show signs of wear and previous use. Overall we expect it to be in very good condition, but if you are not entirely satisfied please get in touch with us.