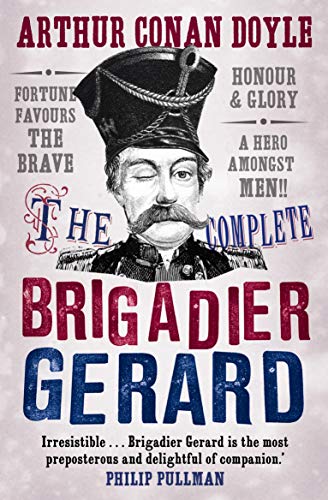 Mon Dieu! The extraordinary, sabre-rattling adventures of Gerard, a young French cavalry officer in the time of the Napoleonic wars, introduce a hero who will be adored by fans of Flashman and Sherlock Holmes alike. Gathered here in one edition are both volumes of Conan Doyle's much loved tales, which will delight modern readers with their absurdist humour, infectious warmth and swash-buckling energy.

The Brigadier Gerard stories display all the narrative gusto of Doyle's more famous Sherlock Holmes, together with an irresistible warmth and humour. The Brigadier himself, bristling with valour and self-regard, is the most preposterous and delightful of companions. -- Philip Pullman
Of course I read every Sherlock Holmes story, but the works I like even more than the detective stories are his great historical stories. -- Winston Churchill
Conan Doyle for thrust and instant atmosphere. -- John le Carre
Brigadier Gerard is, after Holmes and Watson, Conan Doyle's most successful literary creation. -- Julian Symons
Whether rescuing damsels in destress or duelling with adversaries, Gerard is an utterly preposterous hero, and brave to the point of stupidity in these irresistible swashbucklers. * * Tatler * *

Sir Arthur Conan Doyle (1859-1930) was born in Edinburgh. Educated by the Jesuits at Stonyhurst, Doyle entered the medical school at Edinburgh University in 1876, working as a doctor's assistant at times to help pay the fees. He graduated in 1881 and, after Greenland and African voyages as a ship's doctor, went into practice at Southsea, Portsmouth. Conan Doyle had started to write while he was a medical student, and at twenty he had a story published in Chamber's journal. Sherlock Holmes first appeared in A Study in Scarlet (1887), and from 1891 he featured regularly in stories for the Strand Magazine. To replace Holmes, Conan Doyle created Etienne Gerard, a young French cavalry officer from the time of the Napoleonic Wars, whose memoirs were collected as The Exploits of Brigadier Gerard (1896) and its sequel, Adventures of Gerard. Knighted in 1902, Conan Doyle produced more than 60 books in the course of his career, including songs, poetry and historical fiction in the spirit of Scott. But his greatest literary achievement lay in his short stories, unrivalled in the mingling of character, action and atmosphere, whether Holmesian or Gerardine.

NGR9781847679192
The Complete Brigadier Gerard Stories by Sir Arthur Conan Doyle
Sir Arthur Conan Doyle
New
Paperback
Canongate Books Ltd
2010-08-05
416
1847679196
9781847679192
N/A
Book picture is for illustrative purposes only, actual binding, cover or edition may vary.
This is a new book - be the first to read this copy. With untouched pages and a perfect binding, your brand new copy is ready to be opened for the first time.