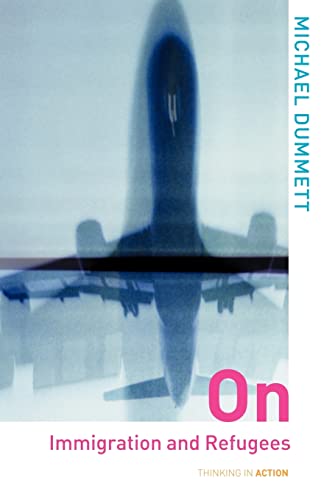 On Immigration and Refugees
by Sir Michael Dummett

In Stock
£14.99
Michael Dummett explores the confused and often unjust thinking on immigration. He questions the principles behind state policies and points out that they often conflict with refugees' rights as laid down by the Geneva Convention.
Very Good Good
7 in stock

On Immigration and Refugees Summary

On Immigration and Refugees by Sir Michael Dummett

Michael Dummett, philosopher and social critic, was one of the sharpest and most prominent commentators and campaigners for the fair treatment of immigrants and refugees in Britain and Europe. This book insightfully draws together his thoughts on this major issue for the first time.

Exploring the confused and often highly unjust thinking about immigration, Dummett then carefully questions the principles and justifications governing state policies, pointing out that they often conflict with the rights of refugees as laid down by the Geneva Convention. With compelling and often moving examples, On Immigration and Refugees points a new way forward for humane thinking and practice about a problem we cannot afford to ignore.

On Immigration and Refugees Reviews

"A lucid philosophical discussion of the ethical principles at stake in matters of immigration and asylum, and a sharp review of the historical ways they have been manhandled.."
-"New Left Review
..."a timely and useful contribution to the debate...a clear, readable and coherent argument.."
-"Humanist News
..."makes the case meticulously...Sir Michael's narrative gains power from its cold-blooded, uncolored language...a terrible indictment of modern British immigration policy.."
-"The Economist
"This book, passionately argued and shot through with a sense of urgency, is Dummett's timely contribution to the debate.. an invigorating read."
-Lena Barrett
..."acutely spots a blank in the mentality of earlier political philosophers who 'have seldom asked what obligations a state has towards those who are not its citizens' and argues powerfully against those who 'hold that we have at most only negative duties towards strangers: that, for example, we may not kill them, but have no duty to protect them from being killed.' He exposes the fraudulence of the phrase 'bogus asylum-seeker'....It would be rash to expect so decent a voice will get much of a hearing. After all, selfishness is not only admired but encouraged all around us....'."
-"The Evening Standard

Sir Michael Dummett, (1925 - 2011) was Wykeham Professor of Logic at the University of Oxford until his retirement in 1992, and was knighted for his "services to philosophy and to racial justice" in 1999.

GOR001193879
On Immigration and Refugees by Sir Michael Dummett
Sir Michael Dummett
Thinking in Action
Used - Very Good
Paperback
Taylor & Francis Ltd
2001-05-21
176
0415227089
9780415227087
N/A
Book picture is for illustrative purposes only, actual binding, cover or edition may vary.
This is a used book - there is no escaping the fact it has been read by someone else and it will show signs of wear and previous use. Overall we expect it to be in very good condition, but if you are not entirely satisfied please get in touch with us.