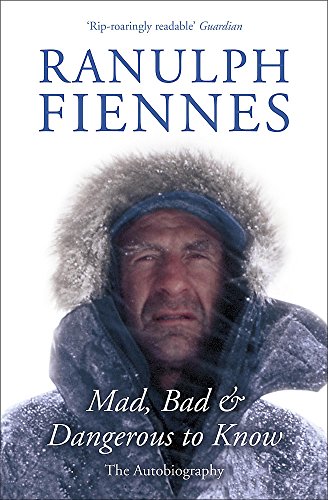 In Stock
£4.99
The extraordinary life story of the man described as 'the world's greatest living explorer' by the Guinness Book of Records
Very Good Good
10 in stock

Ranulph Fiennes has travelled to the most dangerous and inaccessible places on earth, almost died countless times, lost nearly half his fingers to frostbite, raised millions of pounds for charity and been awarded a polar medal and an OBE. He has been an elite soldier, an athlete, a mountaineer, an explorer, a bestselling author and nearly replaced Sean Connery as James Bond.

In his autobiography he describes how he led expeditions all over the world and became the first person to travel to both poles on land. He tells of how he discovered the lost city of Ubar in Oman and attempted to walk solo and unsupported to the North Pole - the expedition that cost him several fingers, and very nearly his life.

His most recent challenge was scaling the north face of the Eiger, one of the most awesome mountaineering challenges in the world. Sir Ranulph Twisleton-Wykeham-Fiennes OBE, 3rd Baronet, looks back on a life lived at the very limits of human endeavour.

'Even readers with a broadly low tolerance for macho heroism will find themselves gripped . . . compelling' - Time Out

Rip-roaringly readable * Guardian *
Even readers with a broadly low tolerance for macho heroism will find themselves gripped . . . compelling * Time Out *
It's exhausting just reading about his exploits, so it is a perfect bedtime book. It's delightful to plump up one's duck-down pillows while vicariously enduring Fiennes's successive plunges into the deadly waters of the Artcic, and his festering crotch-rot. * Helena Drysdale, New Statesman Books of the Year *
It is lively and vivid, and often exciting as we anticipate each plunge into deadly Arctic waters. There are some wonderful throwaway lines . . . So, not an alien species after all but - as they say - a national treasure. * Spectator *
enthralling * Independent *

Sir Ranulph Fiennes was the first man to reach both poles (by surface travel) and the first to cross the Antarctic Continent unsupported. In the 1960s he was removed from the SAS Regiment for misuse of explosives but, joining the army of the Sultan of Oman, received that country`s Bravery Medal. He is the only person yet to have been awarded two clasps to the Polar medal for both Antarctic and the Arctic regions. Fiennes has led over 30 expeditions including the first polar circumnavigation of the Earth. In 1993 Her Majesty the Queen awarded Fiennes the Order of the British Empire (OBE) because, on the way to breaking records, he has raised over GBP10 million for charity.

GOR001200969
Mad, Bad and Dangerous to Know: Updated and revised to celebrate the author's 75th year by Sir Ranulph Fiennes, Bt OBE
Sir Ranulph Fiennes, Bt OBE
Used - Very Good
Paperback
Hodder & Stoughton General Division
2008-05-01
416
0340951699
9780340951699
N/A
Book picture is for illustrative purposes only, actual binding, cover or edition may vary.
This is a used book - there is no escaping the fact it has been read by someone else and it will show signs of wear and previous use. Overall we expect it to be in very good condition, but if you are not entirely satisfied please get in touch with us.