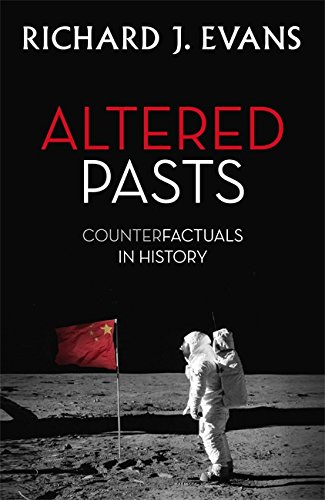 In Stock
£17.99
The question 'what if?' has always fascinated historians. Richard J. Evans imagines what could have been, and how alternate pasts could have shaped alternate futures.
Very Good
Only 1 left

A bullet misses its target in Sarajevo, a would-be Austrian painter gets into the Viennese academy, Lord Halifax becomes British prime minister in 1940: seemingly minor twists of fate on which world-shaking events might have hinged.

Alternative history has long been the stuff of parlour games, war-gaming and science fiction, but over the past few decades it has become a popular stomping ground for serious historians. Richard J. Evans now turns a critical, slightly jaundiced eye on the subject. Altered Pasts examines the intellectual fallout from historical counterfactuals. Most importantly, Evans takes counterfactual history seriously, looking at the insights, pitfalls and intellectual implications of changing one thread in the weave of history.

Unfailingly interesting -- Andrew Holgate * Sunday Times *
A stimulating, thought-provoking and in places quite humorous book that will be of interest to professional and lay readers alike * Times Higher Education Supplement *
His critique is eloquent and lively, without rancour or cruelty -- Felipe Fernandez-Armesto * The Times *
Characteristically pugnacious -- Jonathan Derbyshire * Prospect *
Evans is at his best when dissecting the motives of right-wing thinkers * SFX *
Wide-ranging polemic . . . Evans is at his best on questions of historical causation . . . Altered Pasts brings an impressive historical intelligence to bear on what are too often dismissed as parlour games * Sunday Telegraph *
Evans is ruthless, forensic and totally convincing in demolishing this pretext, finding instead an even greater determinism, where the autonomous actions of a handful of great men set in motion enormous, immutable forces * Guardian *
The place of Richard Evans in modern historiography - a distinguished place - is assured * Times Literary Supplement *
One of the most important and prolific historians of our time . . . Altered Pasts provides much food for thought, not only for professional historians but also for general readers interested in how and why history is written in certain ways. Intelligent, lucid and engaging * Irish Times *
A good read, which stimulates further reflection about the nature of history * Financial Times *

Sir Richard J. Evans is Professor of Modern History at Cambridge University. His previous books include In Defence of History, Telling Lies about Hitler, The Coming of the Third Reich, The Third Reich at War and The Third Reich in Power.

GOR009949921
Altered Pasts: Counterfactuals in History by Sir Richard J. Evans
Sir Richard J. Evans
Used - Very Good
Paperback
Little, Brown Book Group
2014-03-11
224
1408705532
9781408705537
N/A
Book picture is for illustrative purposes only, actual binding, cover or edition may vary.
This is a used book - there is no escaping the fact it has been read by someone else and it will show signs of wear and previous use. Overall we expect it to be in very good condition, but if you are not entirely satisfied please get in touch with us.