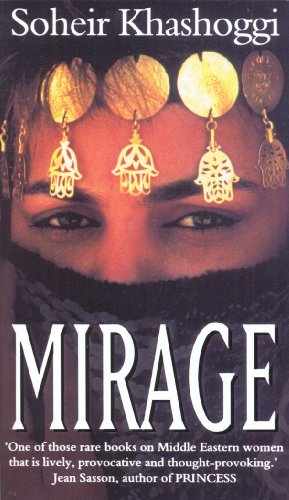 In Stock
£8.99
The engrossing story of Amira, a young girl from a wealthy and powerful family, Mirage takes readers behind the veil of secrecy to expose the real lives of women in today's harems.
Very Good
Only 1 left

The engrossing story of Amira, a young girl from a wealthy and powerful family, Mirage takes readers behind the veil of secrecy to expose the real lives of women in today's harems. Amira expects to be sold into marriage and never to step outside her house without being swathed in black veils and accompanied by an escort. But she's not prepared for the savagery of the husband she first meets on her wedding night, or the increasingly oppressive control he is allowed to exert over her. Finally, in a daring attempt to save her life and sanity, Amira escapes with her baby to start a new life in the United States. But her past - and her powerful husband - won't give her up easily. Mirage is also the story of other harem women. From the death by stoning of a young mother convicted of adultery to the desperate measures taken by a woman whose husband has brought a second wife into their home, Mirage tells the stories of the enduring strength and courage of women who defy the yoke of male dominance. Born to a prominent Saudi Arabian family, author Soheir Khashoggi has seen first-hand the lives of the pampered, indulged - and sometimes abused - women of modern-day harems. The sister of financier Adnan Khashoggi, she has also seen the glittering playgrounds of the western world. In Mirage she brings these two worlds together in a magnificent novel of passion and power. It is the novel that only Soheir Khashoggi could write.

"Stunning! I couldn't put it down! Lifts the veil of secrecy from Muslim traditions, relationships and, above all, family ties" -- Judith Gould, author of Sins
"One of those rare books on Middle Eastern women that is lively, provocative and thought-provoking" -- Jean Sasson, author of Princess

Soheir Khashoggi was born in Alexandria, Egypt. A member of one of Saudi's most prominent families, she has used her influence to highlight the plight of women across the Arab world. She has participated in conferences worldwide and was a speaker at the international Women's World Forum Against Violence, an organization founded by Queen Sofia of Spain. Her acclaimed first novel, Mirage, was published in 1996 and was followed by Nadia's Song in 1999. Her latest novel, Mosaic is also published by Bantam Books. She has four daughters and lives in New York City.

GOR004814856
Mirage by Soheir Khashoggi
Soheir Khashoggi
Used - Very Good
Paperback
Transworld Publishers Ltd
2009-04-13
480
0553824236
9780553824230
N/A
Book picture is for illustrative purposes only, actual binding, cover or edition may vary.
This is a used book - there is no escaping the fact it has been read by someone else and it will show signs of wear and previous use. Overall we expect it to be in very good condition, but if you are not entirely satisfied please get in touch with us.