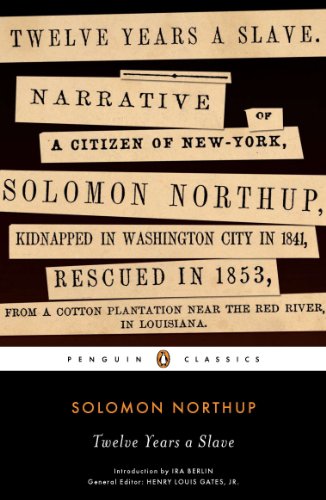 In Stock
£2.69
Born a free man in New York State in 1808, Solomon Northup was kidnapped in Washington, DC, in 1841. He spent the next twelve years as a slave on a Louisiana cotton plantation. During this time he was frequently abused and often afraid for his life. In this book, he gives an account of his captivity.
Very Good Good
6 in stock

Born a free man in New York State in 1808, Solomon Northup was kidnapped in Washington, D.C., in 1841. He spent the next twelve years as a slave on a Louisiana cotton plantation. During this time he was frequently abused and often afraid for his life. After regaining his freedom in 1853, Northup published this gripping account of his captivity. As an educated man, Northup was able to present an exceptionally detailed description of slave life and plantation society. Indeed, this book is probably the fullest, most realistic picture of the 'peculiar institution' during the three decades before the Civil War. Northup tells his story both from the viewpoint of an outsider, who had experienced thirty years of freedom and dignity in the United States before his capture, and as a slave, reduced to total bondage and submission. Very few personal accounts of American slavery were written by slaves with a similar history. This extraordinary slave narrative, new to Penguin Classics, has a new introduction by prize-winning historian and author Ira Berlin, an an essay by Henry Louis Gates Jr.

"I could not believe that I had never heard of this book. It felt as important as Anne Frank's Diary, only published nearly a hundred years before. . . . The book blew [my] mind: the epic range, the details, the adventure, the horror, and the humanity. . . . I hope my film can play a part in drawing attention to this important book of courage. Solomon's bravery and life deserve nothing less." --Steve McQueen, director of 12 Years a Slave, from the Foreword

"Frightening, gripping and inspiring . . . Northup's story seems almost biblical, structured as it is as a descent and resurrection narrative of a protagonist who, like Christ, was 33 at the time of his abduction. . . . Northup reminds us of the fragile nature of freedom in any human society and the harsh reality that whatever legal boundaries existed between so-called free states and slave states in 1841, no black man, woman or child was permanently safe." --Henry Louis Gates, Jr., from the Afterword

"For sheer drama, few accounts of slavery match Solomon Northup's tale of abduction from freedom and forcible enslavement." --Ira Berlin, from the Introduction

"If you think the movie offers a terrible-enough portrait of slavery, please, do read the book. . . . The film is stupendous art, but it owes much to a priceless piece of document. Solomon Northup's memoir is history. . . . His was not simply an extraordinary story, but an account of the life of a great many ordinary people." --The Daily Beast

"An incredible document, amazingly told and structured. Tough, but riveting. The movie of it by Steve McQueen might be the most successful adaptation of a book ever undertaken; text and film complement each other wildly." --Rachel Kushner, The New York Times Book Review

"Northup published a memoir of his 12-year nightmare in 1853, the year after Uncle Tom's Cabin came out, and it was so successful that he went on to participate in two stage adaptations. The book dropped from sight in the 20th century, but the movie tie-in will certainly reestablish its virtually unique status as a work by an educated free man who managed to return from slavery." --The Hollywood Reporter

SOLOMON NORTHUP was kidnapped into slavery in Washington, D.C. in 1841. Shortly after
his escape, he published his memoirs to great acclaim and brought legal action against his
abductors, though they were never persecuted. The details of his life thereafter are unknown, but
he is believed to have died in Glen Falls, NY, around 1863.

IRA BERLIN (introducer) is Distinguished Professor of History at the University of Maryland. His
many books include THE MAKING OF AFRICAN AMERICA (Viking Penguin) and MANY THOUSANDS GONE: THE FIRST TWO CENTURIES OF SLAVERY IN NORTH AMERICA, winner of the Bancroft Prize and the Los Angeles Times Book Prize and a finalist for the National Book Critics Circle Award.

HENRY LOUIS GATES JR. (general editor) is Alphonse Fletcher University Professor and director of
the W. E. B Du Bois Institute for African and African American Research at Harvard University. A
MacArthur Fellow, he is also editor-in-chief of the Oxford African American Studies Center, host
of Faces of America (PBS), and editor-in-chief of TheRoot.com.

GOR005589048
Twelve Years a Slave by Solomon Northup
Solomon Northup
Used - Very Good
Paperback
Penguin Books Ltd
2012-09-04
304
0143106708
9780143106708
N/A
Book picture is for illustrative purposes only, actual binding, cover or edition may vary.
This is a used book - there is no escaping the fact it has been read by someone else and it will show signs of wear and previous use. Overall we expect it to be in very good condition, but if you are not entirely satisfied please get in touch with us.