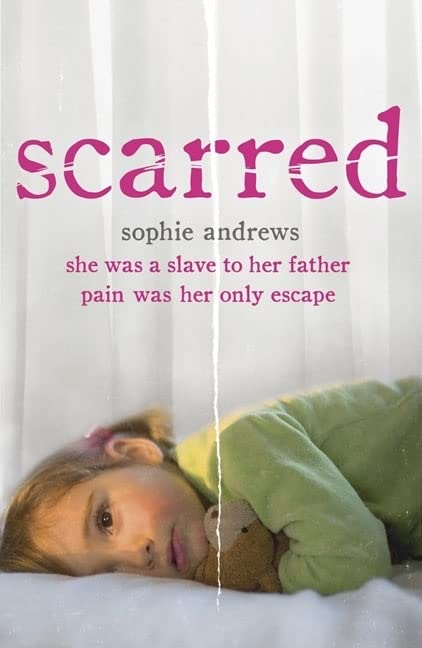 The shocking story of how exceptionally violent abuse turned one girl to desperate self-harm before turning her life around.

Scarred: She was a slave to her father. Pain was her only escape. by Sophie Andrews

The shocking story of how exceptionally violent abuse turned one girl to desperate self-harm before turning her life around.

Growing up, Sophie carried a terrible secret. She was her father's slave, in the most horrific ways imaginable. At just a few months old she was adopted by a couple that seemed comfortably well off and perfectly respectable to the outside world. But behind closed doors, Sophie's childhood was a living hell.

Her father spent the next decade grooming her for abuse and when Sophie's mother left for good, that very night, he told Sophie that from now on she would sleep in his bed. Unable to cope, Sophie spiralled into suicidal misery. She began to self-harm to try and escape the agony. But one day she went too far and at 16, ended up in a psychiatric unit. It was here that she finally confronted the horrors of home and began the painful journey of rebuilding her life. A phenomenally courageous woman, Sophie now works for the Samaritans and helps other young people in need.

Harrowing yet compelling, this is a searing and truly inspirational account of overcoming the worst abuse and self-harm.

Sophie Andrews now lives happily in London and is the Chief Executive of The Silver Line, a 24-hour helpline for senior citizens in the UK. Sophie served as National Chair of Samaritans between 2008-2011 and was subsequently recognised as Voluntary Sector Achiever of the Year in the Women in Public Life Awards.
GOR001222624
9780340937372
0340937378
Scarred: She was a slave to her father. Pain was her only escape. by Sophie Andrews
Sophie Andrews
Used - Very Good
Paperback
Hodder & Stoughton General Division
2009-01-22
336
N/A
Book picture is for illustrative purposes only, actual binding, cover or edition may vary.
This is a used book - there is no escaping the fact it has been read by someone else and it will show signs of wear and previous use. Overall we expect it to be in very good condition, but if you are not entirely satisfied please get in touch with us
Trustpilot