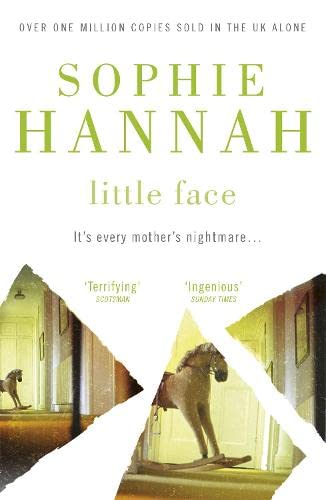 Out of Stock
'It's every mother's nightmare . . .' An extraordinary debut psychological suspense thriller from a hugely talented novelist.
Like New
Only 0 left

The first extraordinary psychological suspense thriller from internationally bestselling author Sophie Hannah. Not to be missed for readers of Clare Mackintosh and Paula Hawkins

She's only been gone two hours.

Her husband David was meant to be looking after their two-week-old daughter. But when Alice Fancourt walks into the nursery, her terrifying ordeal begins, for Alice insists the baby in the cot is a stranger she's never seen before.

With an increasingly hostile and menacing David swearing she must either be mad or lying, how can Alice make the police believe her before it's too late?

Quite brilliant - I was extremely impressed * The Times *
This may well turn out to be the detective novel of the year . . . A terrifying mystery of manipulation, counter-manipulation and, finally, astounding revelation - it's a haunting story told with bewitching skill. * Scotsman *
Chilling and completely gripping - I stayed up half the night to finish it. * Marie Claire *
The author is a poet by trade and she brings a wealth of psychological and literary subtlety to bear in this impressive novel. Smart and disarmingly unnerving * Daily Mail *
Hannah adapts to crime fiction with arresting aplomb: her characters are vivid, the novel's challenging double narrative is handled with flair, and its denouement is ingenious * The Sunday Times *
Women in peril flit through the pages of traditional Gothic fiction, murmuring 'Had I but known!' as they fall for the wrong man, open the wrong door or apply for the wrong job. Sophie Hannah takes the trusty formula in both hands, gives it a vigorous shake and uses it to produce something fascinating and original in her novel. Beautifully written the novel is outstandingly chilling - terror lurks in the half understood and in anticipation. Little Face is a hugely promising debut. Sophie Hannah is an author to watch -- Andrew Taylor * Spectator *
Hannah's whodunit milks a classic formula with subversive results. This missing-baby tale chimes with very modern anxieties. Custody issues lie at the heart of the resolution, and the increasingly perverse relationship between Alice and David is grounded in recognisable reality that serves only to make our flesh crawl more -- Emma Hagestadt * Independent *
A suspensful and psychological thriller, the plot twists and turns right up until the very last * Heat *
Intriguing. Hannah's depiction of relationships tested to the limit by domestic tragedy is impressive -- Simon Shaw * Mail on Sunday *
A gripping psychological thriller * Independent on Sunday *
Sophie Hannah is an award-winning poet and short story writer, and for this, her first novel, she has come up with a chilling thriller . . . I was left thinking about the book for days * Guardian *

GOR010472968
Little Face: Culver Valley Crime Book 1 by Sophie Hannah
Sophie Hannah
Culver Valley Crime
Used - Like New
Paperback
Hodder & Stoughton General Division
2006-08-24
368
0340840323
9780340840320
N/A
Book picture is for illustrative purposes only, actual binding, cover or edition may vary.
The book has been read, but looks new. The book cover has no visible wear, and the dust jacket is included if applicable. No missing or damaged pages, no tears, possible very minimal creasing, no underlining or highlighting of text, and no writing in the margins.