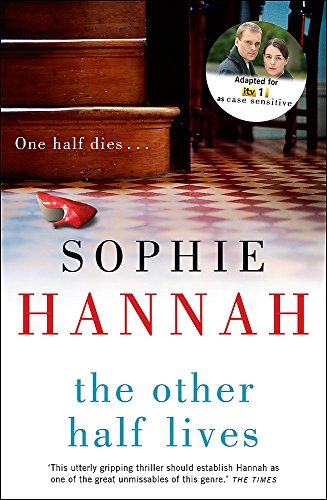 The Other Half Lives
by Sophie Hannah

In Stock
£4.49
Why would anyone admit to the murder of someone who wasn't dead? The fourth psychological suspense novel from the phenomenal bestselling Sophie Hannah.
Very Good Good
8 in stock

The Other Half Lives Summary

The Other Half Lives: Culver Valley Crime Book 4 by Sophie Hannah

The fourth psychological suspense novel from the phenomenal word-of-mouth bestselling Sophie Hannah. A must-read for fans of Clare Mackintosh and Paula Hawkins.

Why would anyone confess to a murder that never happened?

Ruth Bussey knows what it means to be in the wrong and to be wronged. She once did something she regrets, and her punishment nearly destroyed her. Now Ruth is rebuilding her life, and has found a love she doesn't believe she deserves: Aidan Seed.

Aidan is also troubled by a past he hates to talk about, until one day he decides he must confide in Ruth. He tells her that years ago he killed someone: a woman called Mary Trelease.

Ruth is confused. She's certain she's heard the name before, and when she realises why it sounds familiar, her fear and confusion deepen - because the Mary Trelease that Ruth knows is very much alive . . .

The Other Half Lives Reviews

A masterclass in plotting, with twist after twist * Sunday Times *
This utterly gripping thriller should establish her as one of the great unmissables of this genre * The Times *
Beautifully written and precision-engineered to unsettle * Guardian *
Sophie Hannah is the new British queen of the psychological thriller * Heat *
Sophie Hannah has become the master, or mistress, of suspense. This one's even better than her others. Each moment is so purely enjoyable. Her genius is that she creates these very real characters - absolutely incredible. She's at the very peak of crime fiction at the moment * Simon Mayo Book Programme, Radio Five *
This book is long but never tedious, and, as with the finest examples of the genre, Hannah refuses to allow the reader any hope of predicting how it will all end until she decides to put the final piece of the jigsaw in place * Daily Express *
It's a difficult tightrope to walk but Hannah does it triumphantly, maintaining the tension until the very end -- Val McDermid * The Times *
Beautifully written and absorbingly chilling, this is a tale that steadily builds in tension, throwing up twists and turns that keep you guessing right up until the very end * SHE *
An intricate and sinister suspense novel * Woman & Home *
A complex, unnerving study of relationships . . . Her exemplary skills put Hannah right up there with Ruth Rendell * Kirkus Reviews *
This is a monster book in every sense. It is both a chunky psychological thriller and a testamony to the legacy of depravity . . . The trademark neuroses that afflict many of Sophie Hannah's characters lead to multiple twists in the plot, while her brilliantly acerbic dialogue lightens this clever but complicated tale * Waterstones' Books Quarterly *
The pages keep turning . . . The firm grip of suspense will hold you fast until the thrilling ending * Sunday Telegraph *
A real chiller; the clever plot will keep you hooked and guessing to the end * Choice *

GOR001188398
The Other Half Lives: Culver Valley Crime Book 4 by Sophie Hannah
Sophie Hannah
Culver Valley Crime
Used - Very Good
Paperback
Hodder & Stoughton General Division
2009-09-03
576
0340933151
9780340933152
Short-listed for Independent Booksellers' Week Book of the Year Award: Adults' Book of the Year 2010
Book picture is for illustrative purposes only, actual binding, cover or edition may vary.
This is a used book - there is no escaping the fact it has been read by someone else and it will show signs of wear and previous use. Overall we expect it to be in very good condition, but if you are not entirely satisfied please get in touch with us.