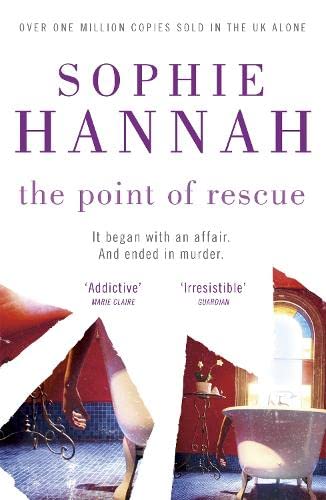 The Point of Rescue
by Sophie Hannah

The Point of Rescue Summary

It began with an affair. And ended in murder.

Sally is watching the news with her husband when she hears a name she ought not to recognise: Mark Bretherick.

Last year, a work trip Sally had planned was cancelled at the last minute. Desperate for a break from her busy life juggling work and a young family, Sally didn't tell her husband that the trip had fallen through. Instead, she booked a week off work and treated herself to a secret holiday.

All she wanted was a bit of peace - some time to herself - but it didn't work out that way. Because Sally met a man. Mark Bretherick. All the details are the same: where he lives, his job, his wife Geraldine and daughter Lucy. Except that the man on the news is a man Sally has never seen before. And Geraldine and Lucy Bretherick are both dead . . .

The Point of Rescue Reviews

For those who demand emotional intelligence and literary verve from their thrillers, Sophie Hannah is the writer of choice. THE POINT OF RESCUE, her third, combines a creepily irresistible page-turner with an exploration of motherhood's taboos * Guardian *
Tension, thy name is Sophie Hannah. In THE POINT OF RESCUE, murder, false identity and infidelity are thet tools Hannah deploys to create a plausible but edge-of-your-seat read * Independent *
The tension is screwed ever tighter until the final shocking outcome * Daily Express *
Hannah doesn't allow the tension to slacken for a second in this addictive, brilliantly chilling thriller. * Book of the Month, Marie Claire *
Sophie Hannah just gets better and better, with experience adding rocket fuel to her already high-octane yarns . . . Brilliantly cunning and entirely unpredictable * Guardian *
Sophie Hannah's ingenious, almost surreal mysteries are so intricately constructed that it's impossible to guess how they will end . . . A compelling and disquieting story, told with the author's usual panache * Sunday Telegraph *
Every so often a writer comes along whose freshness and originality blows the competition out of the water...Genuinely gripping, full of the unseen and yet fitting twists and turns that make good quality crime fiction such a pleasure * Yorkshire Post *
Brilliantly creepy * Red Magazine *
I'm surprised I had any nails left by the end of this addictive thriller * Eve *
This disturbing tale is a cut above the average crime thriller, with an intelligent and inventive plot that raises questions about identity, guilt and the taboo of unfulfilling motherhood * Psychologies *
A great read and an involving thriller * She *
Hannah is an expert in creepy scenarios and plot twists that keep you guessing until the last page. The tension doesn't slacken for a second * Grazia *
Hannah has established herself as a writer of offbeat thrillers that skillfully play on contemporary anxieties about motherhood and marriage. What keeps one reading is the creepy plausibility the author brings to her portrayal of a mind unhinged by the demands of parenthood * The Times *
Hannah constructs a thriller that twists and turns satisfyingly through a series of ever-more surprising revelations * The Sunday Times *
Statistics show that more and more women are committing acts of "family annihilation". In THE POINT OF RESCUE Sophie Hannah tackles this distressing subject with sensitivity, while spinning a cracking story * Daily Telegraph *

GOR000412091
The Point of Rescue: Culver Valley Crime Book 3 by Sophie Hannah
Sophie Hannah
Culver Valley Crime
Used - Very Good
Paperback
Hodder & Stoughton General Division
2008-08-07
464
0340933127
9780340933121
N/A
Book picture is for illustrative purposes only, actual binding, cover or edition may vary.
This is a used book - there is no escaping the fact it has been read by someone else and it will show signs of wear and previous use. Overall we expect it to be in very good condition, but if you are not entirely satisfied please get in touch with us.