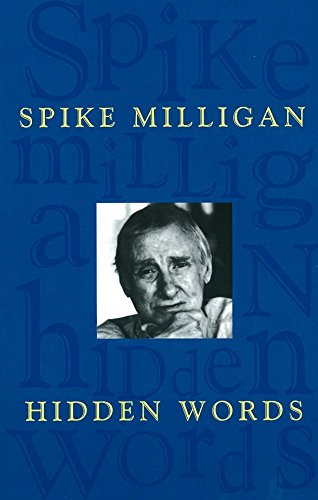 In Stock
£5.99
A collection of tender(ish) moments. It consists of three individual volumes now collected together ("Small Dreams Of A Scorpion", "Open Heart University" and "The Mirror Running") as well as a number of previously unpublished poems.
Very Good Good Well Read
8 in stock

The complete poems of Spike Milligan, Hidden Words consists of three individual volumes now collected together (SMALL DREAMS OF A SCORPION, OPEN HEART UNIVERSITY and THE MIRROR RUNNING) as well as a number of previously unpublished poems. The famously funny and rude poems are there, as well as a number of darker poems written during the war.

'Milligan is the Great God to all of us' John Cleese

Spike Milligan was born in India in 1918, and was the star of the infamous Goon Shows. He has written many books, including a series of humorous war memoirs and most recently a number of re-workings of famous books.

GOR001183333
Hidden Words: Collected Poems by Spike Milligan
Spike Milligan
Used - Very Good
Paperback
Penguin Books Ltd
1997-12-04
192
0140587888
9780140587883
N/A
Book picture is for illustrative purposes only, actual binding, cover or edition may vary.
This is a used book - there is no escaping the fact it has been read by someone else and it will show signs of wear and previous use. Overall we expect it to be in very good condition, but if you are not entirely satisfied please get in touch with us.