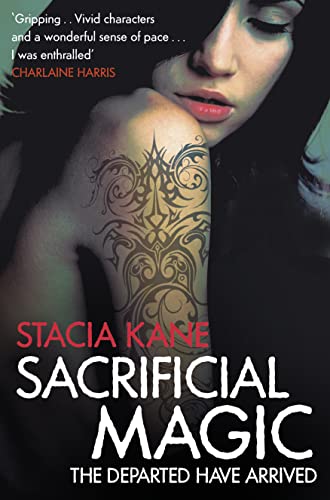 Enter a world of danger, ghosts and magic in the fourth book of the fantastic Downside Ghosts series.

If you liked the compelling characters in 50 Shades of Grey, you'll love the Downside Ghosts series.

Enter a world of danger, ghosts and magic in the fourth book of the fantastic Downside Ghosts series.

If you liked the compelling characters in 50 Shades of Grey, you'll love the Downside Ghosts series.

Ghosts; ghouls; things that go bump in the night. Chess has seen them all in her role as a witch and ghost hunter.

Right now life is going surprisingly well for Chess Putnam. Her bank balance is healthy, she's pretty sure she can call Terrible her "boyfriend", and the last few months have been devoid of anyone trying to kill her.

So when Chess is ordered by an infamous crime boss - who also happens to be her drug dealer - to use her powers as a witch to solve a grisly murder involving dark magic, she is unsurprised; she knew the recent calm wouldn't last. As if that wasn't bad enough, Chess' ex lover Lex, son of a rival crime lord, is trying to re-ignite the sparks between them.

Plus there's the little matter of Chess' real job as a ghost hunter for the Church of Real Truth; investigating reports of a haunting at a school in the heart of Downside. Someone seems to be taking a crash course in summoning the dead-and if Chess doesn't watch her back, she may soon be joining their ranks.

As Chess is drawn into a shadowy world of twisted secrets and dark violence, it soon becomes clear that she's not going to emerge from its depths without making the ultimate sacrifice.

"Gripping... Vivid characters, superior world-building and a wonderful sense of pace... I was enthralled."

"The world-building is unexpected and complex, the characters are alive, and the protagonist Chess is a treasure."

"The characters are complex and indelible, the plot is fascinating, and I can hardly wait for another book..."

Stacia Kane was born in Illinois, raised in St. Louis MO, and lived in South Florida for a dozen years before moving to the UK with her British husband and two daughters. She is the author of the paranormal romance Personal Demons, and The Downside Ghosts is her first urban fantasy series.

GOR004710744
Sacrificial Magic (Downside Ghosts, Book 4) by Stacia Kane
Stacia Kane
Downside Ghosts
Used - Very Good
Paperback
HarperCollins Publishers
2012-05-01
416
0007433115
9780007433117
N/A
Book picture is for illustrative purposes only, actual binding, cover or edition may vary.
This is a used book - there is no escaping the fact it has been read by someone else and it will show signs of wear and previous use. Overall we expect it to be in very good condition, but if you are not entirely satisfied please get in touch with us.