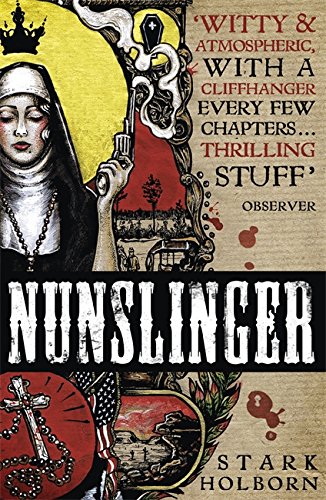 Used Price
£4.19
New RRP £10.99
Free Shipping in the UK
The Western as you've never seen it before!
Reviews:
Trustpilot
Like New Very Good

The year is 1864. Sister Thomas Josephine, an innocent Visitantine nun from St Louis, Missouri, is making her way west to the promise of a new life in Sacramento, California. When an attack on her wagon train leaves her stranded in Wyoming, Thomas Josephine finds her faith tested and her heart torn between Lt. Theodore F. Carthy, a man too beautiful to be true, and the mysterious grifter Abraham C. Muir.

Falsely accused of murder she goes on the run, all the while being hunted by a man who has become dangerously obsessed with her. Her journey will take her from the most forbidding mountain peaks to the hottest, most hostile desert on earth, from Nevada to Mexico to Texas, and her faith will be tested in ways she could never imagine.

Nunslinger is the true tale of Sister Thomas Josephine, a woman whose desire to do good in the world leads her on an incredible adventure that pits her faith, her feelings and her very life against inhospitable elements, the armies of the North and South, and the most dangerous creature of all: man.

Nunslinger is more serious than its name would imply. It is an exceedingly fun read with good people, bad people, blazing guns, chases, jailbreaks, derring-do and all sorts of wildness. But it is also the sort of complex morality tale that harkens back to the best of the Western genre - when writers used the chaos of the uncivilised society and the bleakness of the landscape as a setting for discussions of what makes us human. Sister Josephine is part of that great tradition, and, indeed, Nunslinger already ranks amongst the best that the Western genre has to offer. -- Pornokitsch
I have no idea who is behind the pseudonym of Stark Holborn but whoever it is has written a gripping tale filled with well fleshed-out characters. The story is told in the first person through Sister Josephine. The superb series title, Nunslinger, and the cartoonish cover illustration hints at this perhaps being a comedy western but this isn't the fact. The story is an action-packed traditional western with some hard-hitting scenes. Sister Josephine's struggles to see more than goodness in people adding intrigue to the tale. -- Western Fiction Review
More fun than a rattlesnake in a barn dance brantub. -- Reading Addicts
I love a good western, and NUNSLINGER is a great one. Sharp writing, moral ambiguity, and a story-line that will rope you in and won't let you go. Addictive and original. * Sarah Lotz *
Witty and atmospheric, with a cliffhanger every few chapters, NUNSLINGER is thrilling stuff, even if - as I used to think - westerns aren't really your thing. I galloped through the omnibus edition in one bumpy sitting. * The Observer *

Stark Holborn is the pseudonym of a thrilling new voice in fiction. But he - or she - knows to keep enemies close... and secrets closer.

GOR006241150
Nunslinger: The Complete Series: High Adventure, Low Skulduggery and Spectacular Shoot-Outs in the Wildest Wild West by Stark Holborn
Stark Holborn
Used - Like New
Paperback
Hodder & Stoughton
2014-12-04
624
1444789236
9781444789232
N/A
Book picture is for illustrative purposes only, actual binding, cover or edition may vary.
The book has been read, but looks new. The book cover has no visible wear, and the dust jacket is included if applicable. No missing or damaged pages, no tears, possible very minimal creasing, no underlining or highlighting of text, and no writing in the margins.