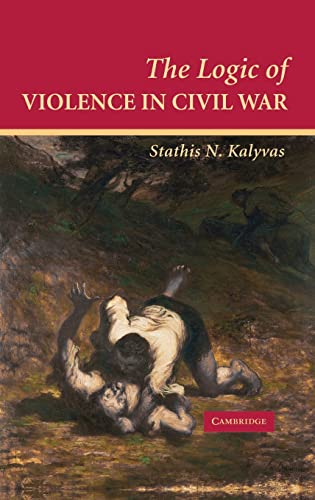 The Logic of Violence in Civil War
by Stathis N. Kalyvas

In Stock
£60.99
Why is violence in civil war so brutal when it is often taking place between people who know each other? Is such violence an instance of collective madness? This book demonstrates that there is logic to this violence, entailing the joint action of armed organizations and individual civilians.
Well Read
Only 1 left

The Logic of Violence in Civil War Summary

The Logic of Violence in Civil War by Stathis N. Kalyvas

By analytically decoupling war and violence, this book explores the causes and dynamics of violence in civil war. Against the prevailing view that such violence is an instance of impenetrable madness, the book demonstrates that there is logic to it and that it has much less to do with collective emotions, ideologies, and cultures than currently believed. Kalyvas specifies a novel theory of selective violence: it is jointly produced by political actors seeking information and individual civilians trying to avoid the worst but also grabbing what opportunities their predicament affords them. Violence, he finds, is never a simple reflection of the optimal strategy of its users; its profoundly interactive character defeats simple maximization logics while producing surprising outcomes, such as relative nonviolence in the 'frontlines' of civil war.

The Logic of Violence in Civil War Reviews

"While exciting and extensive, the recent literature on civil wars suffers from poorly specified and empirically untested causal mechanisms. Therefore Stathis Kalyvas' important study is a welcome contribution to the field, as it reaches an unprecedented level of specificity and detail without sacrificing analytical cogency. Going beyond simplistic dichotomizations, such as 'greed' and 'grievance,' Kalyvas offers compelling evidence that civil wars often contain micro-level actions that have little to do with the main conflict dimension of the war in question. Reflecting both intellectual curiosity and impressive erudition, The Logic of Violence in Civil War promises to become an instant classic in conflict research in particular, and comparative political analysis in general." Lars-Erik Cederman, Swiss Federal Institute of Technology Zurich
"This superb study will be a landmark in the study of civil wars. It is based on deep and broad knowledge and on a remarkably fertile analytical framework. By focusing on the microdynamics of civil wars Kalyvas is both able to lay old misconceptions to rest and to generate and test a wide range of novel ideas. I predict it will be one of those rare books, an 'instant classic'." Jon Elster, College de France
"Some seventeen million people have been killed in civil war violence in the past half-century. Social science has made considerable headway in figuring out which countries are more or less susceptible to a civil war onset. But it is extraordinary that until the appearance of The Logic of Violence in Civil War, there was a dearth of theory and analysis on the dynamics of killing in civil wars. Stathis N. Kalyvas, through his stunning conceptual clarity, his creative synthesis of the historical record, his theoretical formulation, and his path-breaking microanalysis of the patterns of violence in the Greek civil war, has produced a book that would have, if written by the master, made Niccolo Machiavelli proud." David D. Laitin, Stanford University
"This book should become required reading for those interested in the study of civil war and insurgency. It is analytically sophisticated, but also encyclopedic in its sweep and discussion of cases from around the world. While academics and specialists will benefit from the work, the material is accessible for more general readership. Furthermore, the work challenges conventional wisdoms and will provoke controversy." Roger Petersen, Massachusetts Institute of Technology
"Kalyvas's main aim...is to theorize the role of violence as a specific and separate factor in civil war. The author's hypothesis is that violence in particular civil war contexts is linked to the level of control that either insurgents or government forces have over a village or region. He tests it against a large amount of empirical data, primarily from areas of Greece during World War II and the subsequent Civil War, and more impressionistically with accounts and micro-level studies of civil wars from elsewhere. Kalyvas's point is that violence in civil wars cannot be interpreted as simply irrational brutality, but is rather linked to the pursuit of political objectives." Tara McCormack, Brunel University, Journal of Intervention and Statebuilding

Stathis N. Kalyvas is Arnold Wolfers Professor of Political Science at Yale, where he directs the Program on Order, Conflict, and Violence. He has taught at the University of Chicago, New York niversity, and Ohio State University, and has been a visiting professor at the Juan March Institute in Madrid. He is the author of The Rise of Christian Democracy in Europe (1996) which was awarded the J. David Greenstone Prize for the best book in politics and history. He has also received the Gregory Luebbert Award for the best article in comparative politics, and has been a grant recipient of the Harry Frank Guggenheim Foundation and a Jean Monnet Fellow at the European University Institute.

GOR009963640
The Logic of Violence in Civil War by Stathis N. Kalyvas
Stathis N. Kalyvas
Cambridge Studies in Comparative Politics
Used - Well Read
Hardback
Cambridge University Press
2006-05-01
510
0521854091
9780521854092
Winner of Woodrow Wilson Foundation Award 2007 Short-listed for J. David Greenstone Award - Politics and History Section of the American Political Science Association 2007
Book picture is for illustrative purposes only, actual binding, cover or edition may vary.
This is a used book - there is no escaping the fact it has been read by someone else and it will show signs of wear and previous use. Overall we expect it to be in very good condition, but if you are not entirely satisfied please get in touch with us.