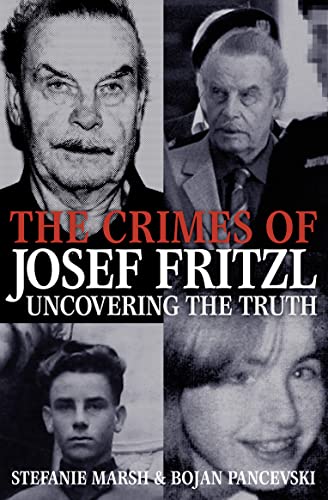 The Crimes of Josef Fritzl
by Stefanie Marsh

The only inside account of the Fritzl case - Josef Fritzl's horrific incarceration of his daughter in a windowless dungeon for 24 years and the seven children he fathered with her - from the journalists who helped to break the story.

The Crimes of Josef Fritzl Summary

The Crimes of Josef Fritzl: Uncovering the Truth by Stefanie Marsh

The only inside account of the Fritzl case - Josef Fritzl's horrific incarceration of his daughter in a windowless dungeon for 24 years and the seven children he fathered with her - from the journalists who helped to break the story.

Until April 19 2008, Josef Fritzl seemed like an upstanding member of the community in the Austrian town of Amstetten: an ideal father and successful businessman who had worked his way up from humble beginnings to become a role model of respectability.

Yet for over two decades he had been living a double life of unimaginable and unparalleled horror. In 1984 he had drugged his 18-year-old daughter, Elisabeth, and dragged her into a purpose-made prison under the house that he had spent five years preparing. He held her captive there for 24 years and raped her frequently. Fritzl initially kept his daughter chained to a bed and forced her to re-enact scenes from pornographic films he projected in the cellar. Three months into her incarceration Elisabeth miscarried what would have been her first child. Over the next 18 years in the cellar she bore her father seven children - six of whom survived. Lisa, Monika and Alexander were taken 'upstairs' to live with their grandmother. Michael died after birth. Kerstin, Stefan and Felix were never to see daylight, trapped with their mother in the five-room cellar.

This bold and forensically-researched study sheds new light on the mind and the psychological development of the man who became one of the most unique and frightening criminals in history. It includes new information on the bizarre formative experiences that shaped his pathology and argues that his crimes, though unthinkable, were in many ways inevitable.

Stefanie Marsh and Bojan Pancevski were the first English-speaking reporters to break the case and were there as the police uncovered the dungeon. They draw on previously unreleased testimonies from the trial as well as exclusive interviews and documents including confidential official files on the case to give the only complete and authoritative account of the forces that drove Fritzl to create another world, far from the light, in which his fantasies of control could be played out.

Stefanie Marsh is a German-speaking senior feature writer at The Times. In 2006 she was nominated as feature writer of the year at the British Press Awards for her reports from Mount Everest.
Bojan Pancevski is a regular contributor for The Times, the Telegraph, the Daily Mail, the Sunday Telegraph and Sunday Times. He has lived in Vienna for seven years and speaks fluent German. He was the first English-speaking reporter to break the Josef Fritzl case and has since covered the story for most of the UK national newspapers as well as television and radio networks across the world.

GOR001188820
The Crimes of Josef Fritzl: Uncovering the Truth by Stefanie Marsh
Stefanie Marsh
Used - Very Good
Paperback
HarperCollins Publishers
2010-03-01
320
0007300557
9780007300556
N/A
Book picture is for illustrative purposes only, actual binding, cover or edition may vary.
This is a used book - there is no escaping the fact it has been read by someone else and it will show signs of wear and previous use. Overall we expect it to be in very good condition, but if you are not entirely satisfied please get in touch with us.