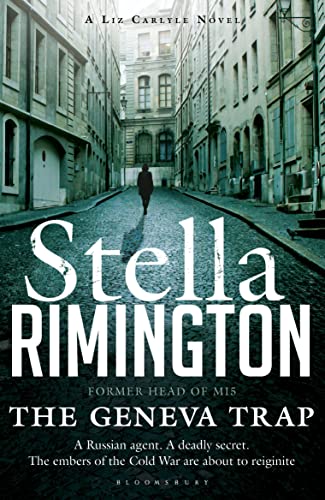 The Geneva Trap
by Stella Rimington

The Geneva Trap: A Liz Carlyle novel by Stella Rimington

When a rogue Russian spy warns her of a plot to hack into the West's military satellite systems, MI5's Liz Carlyle finds her past catching up with her... Geneva, 2012. When a Russian intelligence officer approaches MI5 with vital information about the imminent cyber-sabotage of an Anglo-American Defence programme, he refuses to talk to anyone but Liz Carlyle. But who is he, and what is his connection to the British agent? At a tracking station in Nevada, US Navy officers watch in horror as one of their unmanned drones plummets out of the sky, and panic spreads through the British and American Intelligence services. Is this a Russian plot to disable the West's defences? Or is the threat coming from elsewhere? As Liz and her team hunt for a mole inside the MOD, the trail leads them from Geneva, to Marseilles and into a labyrinth of international intrigue, in a race against time to stop the Cold War heating up once again...

PRAISE FOR STELLA RIMINGTON: 'Rimington's best work demonstrates a flair for narrative, with a sense of authenticity and an insider's grasp on the pressing issues of the day * Washington Post *
For a pacy page-turner, she's a safe bet ... Rimington is particularly strong in her accounts of procedure, unsurprisingly, given her past role as Head of MI5 * Independent *
Liz Carlyle is an MI5 agent with the traditional thriller-heroine mix of dysfunctional personal life and steely ambition * Daily Telegraph *
Rich with authentic details from Rimington's own life as director general of MI5, this is a must-read for fans of contemporary spy fiction * Publishers Weekly *

Dame Stella Rimington joined the Security Service (MI5) in 1968. During her career she worked in all the main fields of the Service: counter-subversion, counter-espionage and counter-terrorism. She was appointed Director General in 1992, the first woman to hold the post. She has written her autobiography and six Liz Carlyle novels. She lives in London and Norfolk.

GOR004873948
The Geneva Trap: A Liz Carlyle novel by Stella Rimington
Stella Rimington
A Liz Carlyle Novel
Used - Very Good
Paperback
Bloomsbury Publishing PLC
2013-07-04
336
1408832186
9781408832189
N/A
Book picture is for illustrative purposes only, actual binding, cover or edition may vary.
This is a used book - there is no escaping the fact it has been read by someone else and it will show signs of wear and previous use. Overall we expect it to be in very good condition, but if you are not entirely satisfied please get in touch with us.