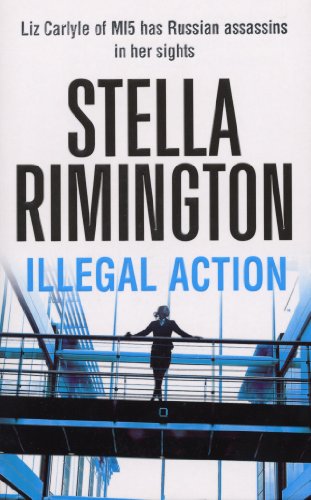 ILLEGAL ACTION is the third thriller from the former head of MI5 and bestselling author Stella Rimington, featuring MI5 officer Liz Carlyle. When MI5 intelligence officer Liz Carlyle learns of a Russian government plot to kill super-rich Nikita Brunovsky - a man who openly criticises the Putin regime from his London base - it's a race against time to track down the killer. How the man is to be silenced is unclear, but the Foreign Office dreads any kind of incident and Liz must work fast to protect him. As she goes undercover, desperately trying to find out who in Brunovsky's retinue might betray him, Liz discovers that an `illegal' Russian agent has arrived in London. Is this the assassin she is seeking? Under an assumed name, caught up in the high-octane world of the oligarchs, Liz soon finds herself in terrible danger...

"Rimington's plot, as one should expect from a former head of MI5, bristles with subterfuge and splices in allusions to Litvinenko's poisoning to give Illegal Action a contemporary feel . . . Gripping . . . Carlyle, in her third outing, has depth and tenacity" * Financial Times *
"The thing about Ms Rimington's stories is that they have the smack of authenticity" -- Baz Bamingboye * Daily Mail *
"There is every sign of inside knowledge about this spying business as our hero Liz enters the world of mega-rich and mega-eccentric Russian 'oligarchs' in London" * Guardian *
"Rimington's command of espionage and counterespionage history and techniques enables her to bring enormous believability to her well-paced narrative. Her dialogue moves as swiftly as the action, and her characters are as believable as the world in which they - and we - live. Fans of intelligent spy thrillers are in for a treat" * Publishers Weekly (starred review) *
"An ideal beach read for the upcoming vacation season . . . Elements of the old-fashioned spy novel -sudden twists and characters with hidden agendas-combine with James Patterson's secret to success" * Booklist *

Stella Rimington joined the Security Service (MI5) in 1965 and was appointed Director-General in 1992.She was the first woman to hold the post and the first Director-General whose name was publicly announced on appointment. Following her retirement from MI5 in 1996, she became a non-executive director of Marks and Spencer and published her autobiography, Open Secret. At Risk and Secret Asset, the first two Liz Carlyle novels, are available in Arrow.

GOR001215388
Illegal Action: (Liz Carlyle 3) by Stella Rimington
Stella Rimington
Liz Carlyle
Used - Very Good
Paperback
Cornerstone
2008-10-02
400
0099502135
9780099502135
N/A
Book picture is for illustrative purposes only, actual binding, cover or edition may vary.
This is a used book - there is no escaping the fact it has been read by someone else and it will show signs of wear and previous use. Overall we expect it to be in very good condition, but if you are not entirely satisfied please get in touch with us.