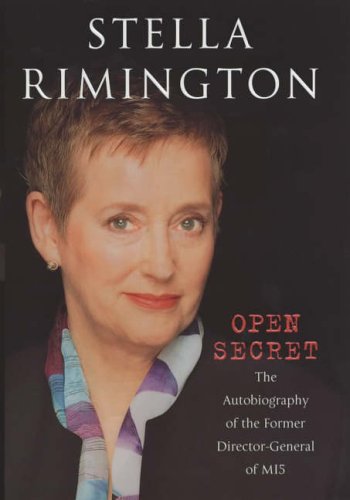 Out of Stock
Known as the "female James Bond", former Director General of MI5, Stella Rimington, tells her life story. She discusses her personal life and her professional life; how she coped as a single parent, how she had originally chosen a "safe" career, and how she became the head of British Intelligence.
Very Good
Only 0 left

Open Secret: The Autobiography of the Former Director-General of MI5 by Stella Rimington

Stella Rimington writes: 'Nothing in my life ever turned out as expected. Having originally chosen a safe career, I ended up as leader of one of the country's intelligence agencies and a target for terrorists. Having conventionally married my schoolfriend, I ended up a single parent. Having begun work in the days when women's careers were not taken seriously, I ended up advising ministers and Prime Ministers. I have experienced all this from an unusual position, inside the secret state. 'In the 1980s I was seen by some as Mrs Thatcher's stooge, the leader of an arm of the secret state which was helping her to beat the miners' strike and destroy the NUM. I was portrayed as the investigator of CND and even as the one who had ordered the murder of an old lady peace campaigner. In 1992, when I first emerged into the public gaze as Director-General of MI5, I became a female James Bond, 'Housewife Superspy', 'Mother of Two Gets Tough with Terrorists'. And finally, with the writing of this book, I have become, to some, 'Rickless Rimington', careless of our national security. I don't recognize myself in any of those roles. 'The unexpected course of my life has involved me closely with some of the significant issues of the late 20th century: the rise of terrorism, the end of the Cold War and some of the big social questions: women's place in society - how can work and family be combined? Civil liberties - how far should the state intrude on the citizens' privacy to ensure their safety? Open government - how much should the public know about the secret state and how should it be controlled? These are some of the issues that concerned me throughout my career in MI5, and which I discuss in this book.'

"The story of MI5's transformation... is fascinating. So too is Rimington's account of her rise in what was very definitely a man's world." -- "The Guardian
"The most effective Secret Service is the one which is secret. She should shut up." -- Bernard Ingham
"Stella Rimington deserves our thanks for resisting the bullying of the cabinet office and many of her colleagues and associates in Whitehall and pushing on to publication." -- "New Statesman

"From the Trade Paperback edition.

Born and educated in England, Stella Rimington joined the Security Service (MI5) part-time in 1965, while she was in India accompanying her husband on a posting to the British High Commission in New Delhi. On her return to the UK she joined MI5 as a full-time employee. During her career in MI5, Stella Rimington worked in all the main fields of the Service's responsibilities - counter-subversion, counter-espionage and counter-terrorism - and became successively Director of all three branches. She was appointed Director-General of MI5 in 1992. She was made a Dame Commander of the Bath (DCB) in 1995, and retired from MI5 in 1996, to take up various non-executive directorships and charity work.

GOR001204062
Open Secret: The Autobiography of the Former Director-General of MI5 by Stella Rimington
Stella Rimington
Used - Very Good
Hardback
Cornerstone
2001-09-13
307
0091793602
9780091793609
N/A
Book picture is for illustrative purposes only, actual binding, cover or edition may vary.
This is a used book - there is no escaping the fact it has been read by someone else and it will show signs of wear and previous use. Overall we expect it to be in very good condition, but if you are not entirely satisfied please get in touch with us.