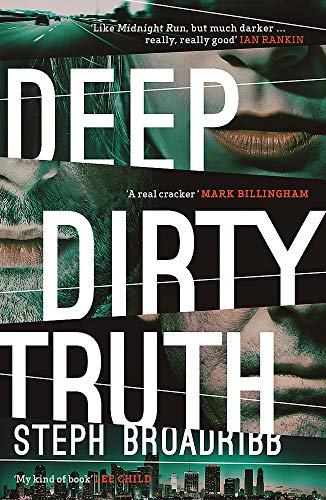 Used Price
£4.49
New RRP £8.99
Free Shipping in the UK
Single-mother bounty hunter Lori Anderson returns in another nail-biting, high-voltage read. She's as tough as they come, but when her family is threatened, she takes on a job that could change everything ...
Reviews:
Trustpilot
Very Good Good

Single-mother bounty-hunter Lori Anderson returns in another nail-biting, high-voltage read. When Lori's family is threatened, she takes on a job that could change everything ...

`My kind of book' Lee Child

Single-mother bounty-hunter Lori Anderson finally has her family back together, but her new-found happiness is shattered when she's snatched by the Miami Mob - and they want her dead. Rather than a bullet, they offer her a job: find the Mob's `numbers man' who's in protective custody after being forced to turn federal witness against them. If Lori succeeds, they'll wipe the slate clean and the price on her head - and those of her family - will be removed. If she fails, they die.

With North due in court in 48 hours, Lori sets off across Florida, racing against the clock to find him and save her family. Only in this race the prize is more deadly - and the secret she shares with JT more dangerous - than she ever could have imagined.

In this race only the winner gets out alive...

`Lori thinks with viper-like speed, speaks with strength and acts from her gut. Steph Broadribb has constructed a thoroughly believable world full of substantial yet flawed characters. I quite simply love this series, I leap in with total faith and just let myself go. Deep Dirty Truth is a thrilling, assertive and energetic read' LoveReading

'Sharp, thrilling and one hell of a ride. This series just gets better and better!' Chris Whitaker

`Broadribb's writing is fresh and vivid, crackling with life ... an impressive thriller, the kind of book that comfortably sits alongside seasoned pros' Crime Watch

`Romping entertainment that moves faster than a bullet' Sunday Express

`Stylish with an original take on the lone wolf/bounty hunter theme. This is a novel alive with tension and intriguing twists. ... There's a good deal of wit at the expense of the complacent, anachronistic, loud mouthed quick-fisted mobsters. Just a whole hell of a lot of fun' New Book Magazine

`This is every bit as lively an outing for Broadribb's heroine as its predecessor, and the pace is satisfyingly unrelenting' Barry Forshaw's Book of the Month, Crime Time

`Fast-faced, page-turning thriller ... It is so refreshing to read a thriller with a female central character. Especially when that female is as all-round compelling as Lori Anderson' Crime Squad

`Nerve-wracking and so fast-paced you won't have time to even stop and breathe ... a totally cracking book three' Jen Med's Book Reviews

`A compelling and thrilling read, with a kickass protagonist readers are going to love' By-the-Letter Book Reviews

`With a heroine who jumps off the page and a fantastic supporting cast, this series is a sure-fire winner for anyone with a pulse' SJI Holliday

`Fast and furious ... a book you genuinely can't put down' TripFiction

`I am already looking forward to reading the next book in this fantastic series!' Book after Book

`The best one yet' Ginger Nut

`A thriller with bite, grit and attitude' The Book Trail

`Superb' Hair Past a Freckle

`Romping entertainment that moves faster than a bullet' Sunday Express `A whirlwind of a thriller' Sunday People `A punchy and powerful adventure that will leave you wanting more' Mirror `Draws in readers like a magnet' Burnley Gazette `This is a good one: fast, confident, and suspenseful. My kind of book' Lee Child `Steph Broadribb kicks ass, as does her ace protagonist Lori Anderson!' Mark Billingham `A blast of a book - fast-paced, engaging and hugely entertaining' Simon Toyne

Steph Broadribb was born in Birmingham and grew up in Buckinghamshire. Most of her working life has been spent between the UK and USA. As her alter ego - Crime Thriller Girl - she indulges her love of all things crime fiction by blogging at crimethrillergirl.com, where she interviews authors and reviews the latest releases. Steph is an alumni of the MA in Creative Writing (Crime Fiction) at City University London, and she trained as a bounty hunter in California. She lives in Buckinghamshire surrounded by horses, cows and chickens. Her debut thriller, Deep Down Dead, was shortlisted for the Dead Good Reader Awards in two categories, and hit number one on the UK and AU kindle charts. My Little Eye, her first novel under her pseudonym Stephanie Marland was published by Trapeze Books in April 2018. Follow Steph on Twitter @CrimeThrillGirl and on Facebook facebook.com/CrimeThrillerGirl or visit her website: crimerthrillergirl.com

GOR009755138
Deep Dirty Truth by Steph Broadribb
Steph Broadribb
Used - Very Good
Paperback
Orenda Books
2019-01-24
304
1912374552
9781912374557
N/A
Book picture is for illustrative purposes only, actual binding, cover or edition may vary.
This is a used book - there is no escaping the fact it has been read by someone else and it will show signs of wear and previous use. Overall we expect it to be in very good condition, but if you are not entirely satisfied please get in touch with us.