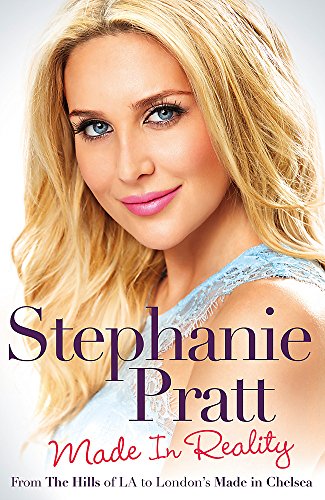 Made in Reality by Stephanie Pratt

A tell-all memoir by the star of MTV's The Hills and E4's Made in Chelsea.

Made in Reality by Stephanie Pratt

Since 2007, her life has been lived almost as much on the small screen as off it, and constantly analysed in gossip columns. In Made in Reality, Stephanie gives an exclusive insight into the trials and tribulations of life on reality TV, taking us behind the scenes of The Hills, Made in Chelsea and even the Big Brother House. Nothing is off-limits, from the drama of her relationship with Spencer Matthews, to her issues with her brother Spencer Pratt. But there is more to Stephanie than the glamour of Beverly Hills and the Kings Road. For the first time, she shares her struggles with drug addiction, eating disorders, and the pressures of fame in the internet age.

Inspiring, fascinating, and insightful throughout, this is an honest account of the truth behind reality.

Stephanie Pratt was born in LA in 1986. Her rise to fame catapulted Stephanie in to the public eye, showing a perfect, privileged life. However, in reality she was struggling with substance abuse and body issues. When her brother, Spencer, creator of hit reality TV show The Hills, asked her to join the cast, Stephanie instantly became a global celebrity. Now living in London and starring in Made in Chelsea, Stephanie is finally settled and ready to reveal the truth about her life and what it means to be a reality TV star.
GOR006938021
9781472230348
1472230345
Made in Reality by Stephanie Pratt
Stephanie Pratt
Used - Very Good
Hardback
Headline Publishing Group
2015-08-01
288
N/A
Book picture is for illustrative purposes only, actual binding, cover or edition may vary.
This is a used book - there is no escaping the fact it has been read by someone else and it will show signs of wear and previous use. Overall we expect it to be in very good condition, but if you are not entirely satisfied please get in touch with us
Trustpilot