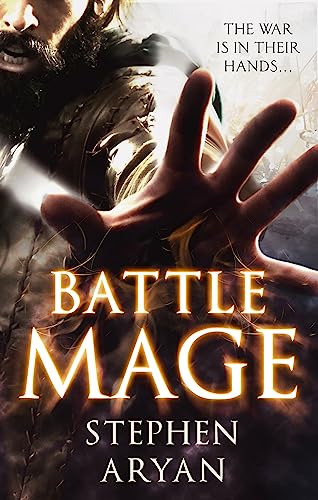 'I can command storms, summon fire and unmake stone,' Balfruss growled. 'It's dangerous to meddle with things you don't understand.'

***Shortlisted for the David Gemmell Award***

BALFRUSS is a battlemage, sworn to fight and die for a country that fears his kind.
VARGUS is a common soldier - while mages shoot lightning from the walls of his city, he is down on the front line getting blood on his blade.
TALANDRA is a princess and spymaster, but the war will force her to risk everything, and make the greatest sacrifice of all.

Magic and mayhem collide in this explosive epic fantasy from a major new talent.

For more from Stephen Aryan and the world of Battlemage, check out:

ebook-only novella: Of Gods and Men

Stephen Aryan puts the epic into Epic Fantasy. This is a ground-shaking debut, full of fiery promise -- Den Patrick, author of THE BOY WITH THE PORCELAIN BLADE
Aryan's battle scenes are visceral masterpieces that transport the reader deep into the melee. Read. This. Book. -- Taran Matharu, author of the Summoner series

Stephen Aryan was born in 1977 and was raised and educated in Whitley Bay, Tyne and Wear. After graduating from Loughborough University he started working in marketing, and for some reason he hasn't stopped. A keen podcaster, lapsed gamer and wannabe forest ranger, when not extolling the virtues of Babylon 5, he can be found drinking real ale and reading comics. He lives in the West Midlands with his partner and two cats.

GOR007100621
Battlemage: Age of Darkness, Book 1 by Stephen Aryan
Stephen Aryan
The Age of Darkness
Used - Very Good
Paperback
Little, Brown Book Group
2015-09-24
512
0356504808
9780356504803
Short-listed for David Gemmell Awards for Fantasy Fiction 2016 (UK)
Book picture is for illustrative purposes only, actual binding, cover or edition may vary.
This is a used book - there is no escaping the fact it has been read by someone else and it will show signs of wear and previous use. Overall we expect it to be in very good condition, but if you are not entirely satisfied please get in touch with us.