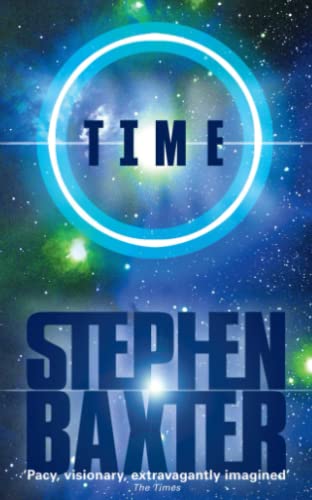 In the millennium's last great sf novel, Stephen Baxter takes us a short step byond Y2K. The year is 2010. We have survived ... so far.

In the millennium's last great sf novel, Stephen Baxter takes us a short step byond Y2K. The year is 2010. We have survived ... so far.

Cornelius Taine of Eschatology, Inc., mathematical genius, predicts that in just 200 years our species will be wiped out. Even evacuation from Earth will not save us from extinction.

Reid Malenfant, entrepreneur, has Big Dumb Boosters ready to fly from the California desert, to be piloted by an enhanced squid named Sheena 5. When Taine offers Malenfant the ultimate dream of saving the species, Sheena's mission is diverted to investigate Earth's recently discovered - and very remote - second moon.

What Sheena 5 discovers there is nothing less than a revelation: the secret reason for our existence visible at last beneath the rippled surface of Time's river. Malenfant and Taine must follow Sheena... but they are pursued by an enraged US Air and Space Force, and a mighty battle in space may cut short their hopes for the ultimate transformation of mankind.

Stephen Baxter applied to become an astronaut in 1991. He didn't make it, but achieved the next best thing by becoming a science fiction writer, and his novels and short stories have been published and have won awards around the world. His science background is in maths and engineering. He is married and lives in Northumberland.

GOR000872563
Time by Stephen Baxter
Stephen Baxter
Used - Very Good
Paperback
HarperCollins Publishers
2000-08-07
464
0006511821
9780006511823
N/A
Book picture is for illustrative purposes only, actual binding, cover or edition may vary.
This is a used book - there is no escaping the fact it has been read by someone else and it will show signs of wear and previous use. Overall we expect it to be in very good condition, but if you are not entirely satisfied please get in touch with us.