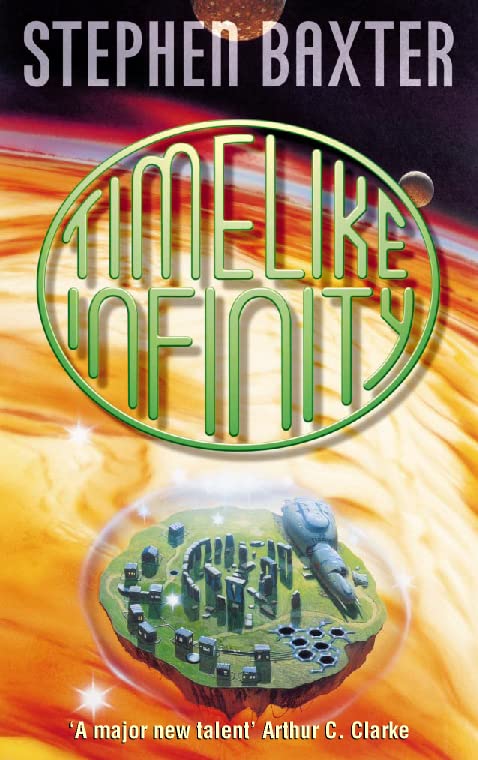 Timelike Infinity: the strange region at the end of time where the Xeelee, owners of the universe, are waiting... The second novel in Stephen Baxter's Xeelee sequence.

Timelike Infinity: the strange region at the end of time where the Xeelee, owners of the universe, are waiting... The second novel in Stephen Baxter's Xeelee sequence.

First there were good times: humankind reached glorious heights, even immortality. Then there were bad times: Earth was occupied by the faceless, brutal Qax. Immortality drugs were confiscated, the human spirit crushed. Earth became a vast factory for alient foodstuffs.

Into this new dark age appears the end of a tunnel through time. Made from exotic matter, it is humanity's greatest engineering project in the pre-Qax era, where the other end of the tunnel remains anchored near Jupiter. When a small group of humans in a makeshift craft outwit the Qax to escape to the past through the tunnel, it is not to warn the people of Earth against the Qax, who are sure to follow them. For these men and women from the future are themselves dangerous fanatics in pursuit of their own bizarre quantum grail.

Michael Poole, architect of the tunnel, must boldly confront the consequences of his genius.

Praise for The Xeelee Sequence:

`Fast paced, strong on suspense, efficiently written, and has moral weight, but it is in the creation of a genuinely strange and believable new universe that Baxter excels... rigorous, vigorous SF at its enjoyable best'
TIME OUT

`Arthur C. Clarke, Poul Anderson, Isaac Asimov and Robert Heinlein succeeded in doing it, but very few others. Now Stephen Baxter joins their exclusive ranks - writing science fiction in which the science is right, the author knowledgeable, and the extrapolations a sheer pleasure to read, admire, enjoy'
NEW SCIENTIST

Stephen Baxter applied to become an astronaut in 1991. He didn't make it, but achieved the next best thing by becoming a science fiction writer, and his novels and short stories have been published and won awards around the world. His science background is in maths and engineering. He is married and lives in Buckinghamshire.

GOR001111335
Timelike Infinity by Stephen Baxter
Stephen Baxter
Used - Very Good
Paperback
HarperCollins Publishers
1997-08-18
256
000647618X
9780006476184
N/A
Book picture is for illustrative purposes only, actual binding, cover or edition may vary.
This is a used book - there is no escaping the fact it has been read by someone else and it will show signs of wear and previous use. Overall we expect it to be in very good condition, but if you are not entirely satisfied please get in touch with us.