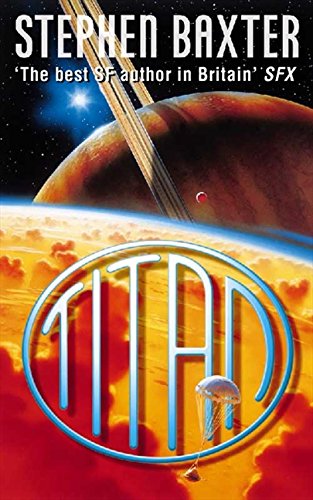 Titan is the epic saga of one woman's will to succeed and the triumph of a dream over bureaucracy and fear. Paula Benacerraf, grandmother and astronaut, is appointed to oversee the dismantling of the Shuttle fleet after another Challenger-type disaster. Instead, she listens to the oddball JPL scientist Rosenberg, who is determined to explore the ammonia-based life Cassini discovers on Titan.

Using NASA's rusting Saturn rockets, mothballed Apollos and remaining Shuttles, frail humans are hurled, in the face of violent opposition from the military, to the edge of the Solar System. To the edge, also, of sanity.

Praise for The NASA Trilogy:

`VOYAGE is, quite simply, a brilliant book . . . skilfully constructed and enthrallingly told'
SFX

`Baxter handles a complex and gripping plot with his customary aplomb... The ending will blow your mind. Buy TITAN, read it - and then go out and buy everything else that Baxter has ever written'
NEW SCIENTIST

`A plausible tale of America's last gasp at interplanetary exploration... Stephen Baxter proves what a cosmic thinker he is'
WASHINGTON POST

Stephen Baxter applied to become an astronaut in 1991. He didn't make it, but achieved the next best thing by becoming a science fiction writer, and his novels and short stories have been published and have won awards around the world. His science background is in maths and engineering. He is married and lives in Buckinghamshire.

GOR000897583
Titan by Stephen Baxter
Stephen Baxter
Used - Very Good
Paperback
HarperCollins Publishers
1998-05-04
592
0006498116
9780006498117
N/A
Book picture is for illustrative purposes only, actual binding, cover or edition may vary.
This is a used book - there is no escaping the fact it has been read by someone else and it will show signs of wear and previous use. Overall we expect it to be in very good condition, but if you are not entirely satisfied please get in touch with us.