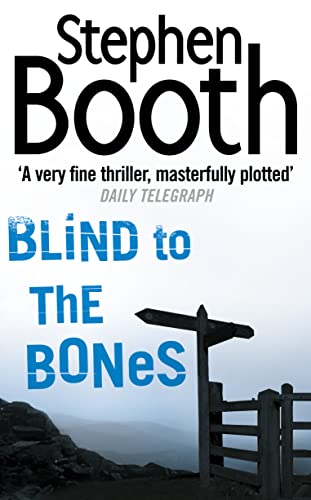 Blind to the Bones
by Stephen Booth

A death in the family-from-hell bring Detectives Fry and Cooper to a remote and unfriendly rural community in their fourth psychological thriller.

Blind to the Bones Summary

Blind to the Bones (Cooper and Fry Crime Series, Book 4) by Stephen Booth

A death in the family-from-hell bring Detectives Fry and Cooper to a remote and unfriendly rural community in their fourth psychological thriller.

'And as it grew dark, Withens became almost entirely silent. Except for the screaming.'

A small village in the Peak District, Withens is troubled by theft and vandalism, mostly generated by local family-from-hell, the Oxleys. Now it is the focus of a murder investigation - a man's body has been found on the bleak moors nearby, and the man is an Oxley. To crack the case, DC Ben Cooper must break open the delinquent clan.

His boss, DS Diane Fry, is also in Withens. Grim new evidence has turned up in the case of a missing student but her parents refuse to believe she could be dead.

The darkness in Withens's heart is growing. And things are only going to get nastier...

Blind to the Bones Reviews

Praise for Blind to the Bones:

`He has got better with each book. This is another very fine book, masterfully plotted and filled with real flesh-and-blood personalities' Daily Telegraph

`Stephen Booth creates a fine sense of place and atmosphere ... the unguessable solution to the crime comes as a real surprise' Sunday Telegraph

`A dark star may be born!' Reginald Hill

Stephen Booth was born in the Lancashire mill town of Burnley and has remained rooted to the Pennines during his career as a newspaper journalist. He lives with his wife Lesley in a former Georgian dower house in Nottinghamshire and his interests include folklore, the Internet and walking in the hills of the Peak District. This is the fourth novel in his series set in the Peak District.

GOR000499120
Blind to the Bones (Cooper and Fry Crime Series, Book 4) by Stephen Booth
Stephen Booth
Cooper and Fry Crime Series
Used - Very Good
Paperback
HarperCollins Publishers
2003-12-06
640
0007130678
9780007130672
N/A
Book picture is for illustrative purposes only, actual binding, cover or edition may vary.
This is a used book - there is no escaping the fact it has been read by someone else and it will show signs of wear and previous use. Overall we expect it to be in very good condition, but if you are not entirely satisfied please get in touch with us.