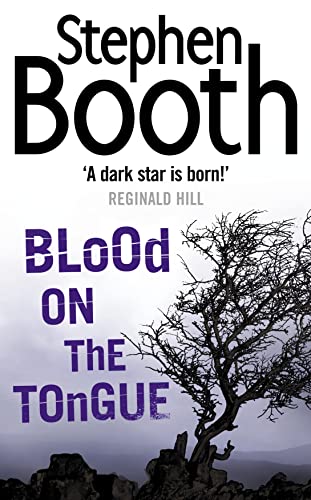 Blood on the Tongue
by Stephen Booth

Guilt, sacrifice and redemption in a freezing Derbyshire winter in this tense psychological thriller from the acclaimed author of `Black Dog'.

Blood on the Tongue Summary

Blood on the Tongue (Cooper and Fry Crime Series, Book 3) by Stephen Booth

Guilt, sacrifice and redemption in a freezing Derbyshire winter in this tense psychological thriller from the acclaimed author of `Black Dog'.

'The sun had dropped over the edge of Irontongue Hill so that the snow-covered moor was in shadow ... but Marie Tennent would never see the dawn.'

Marie's was not the only body lying undiscovered under the Peak District snow that January morning - nor the first. In 1945, the wreckage of a bomber was found on the Hill, full of dead crewmen. The missing pilot was declared responsible, but why would a decorated hero desert? The only other survivor refuses to talk. A young Canadian woman has arrived to uncover the truth - the pilot was her grandfather. DC Ben Cooper is intrigued. Perhaps he can help?

To his boss DS Fry, investigating two frozen bodies found on the moors, her colleague's interest is entirely unprofessional. But the past has a way of influencing the present and before either knows it, a long-cold trail in the dead of winter has grown dangerously hot ...

Blood on the Tongue Reviews

`Stephen Booth creates a fine sense of place and atmosphere ... the unguessable solution to the crime comes as a real surprise' Sunday Telegraph

` 'Best traditional crime novel of the year'
Independent, Books of the Year

Stephen Booth is a journalist. `Blood on the Tongue' was the third novel in his series set in the Peak District, and followed on from the success of the Gold Dagger-nominated `Dancing with the Virgins', and his widely acclaimed debut `Black Dog'.

GOR000510668
Blood on the Tongue (Cooper and Fry Crime Series, Book 3) by Stephen Booth
Stephen Booth
Cooper and Fry Crime Series
Used - Very Good
Paperback
HarperCollins Publishers
2003-04-07
640
000713066X
9780007130665
N/A
Book picture is for illustrative purposes only, actual binding, cover or edition may vary.
This is a used book - there is no escaping the fact it has been read by someone else and it will show signs of wear and previous use. Overall we expect it to be in very good condition, but if you are not entirely satisfied please get in touch with us.