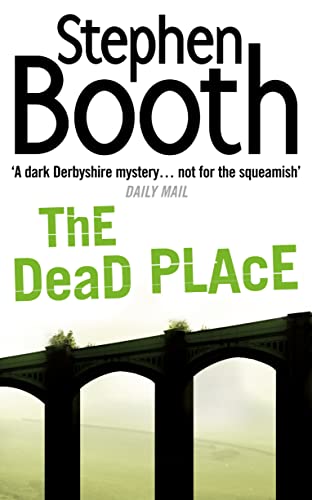 The Dead Place
by Stephen Booth

Bones where there should be none and a chilling warning of an imminent killing challenge Detectives Ben Cooper and Diane Fry in their sixth novel.

Bones where there should be none and a chilling warning of an imminent killing challenge Detectives Ben Cooper and Diane Fry in their sixth novel.

"This death will be a model of perfection. The details will be precise, the conception immaculate, the execution flawless..."

When a caller taunts the police with talk of a 'dead place' and the threat of an imminent killing, most think it's a sick hoax. But Detective Diane Fry is sure there's a murderer at work. And when the voice calmly invites them to meet the 'flesh eater', Fry fears it may be too late. Meanwhile, her colleague DC Ben Cooper is investigating Derbyshire's first case of body snatching, entering the macabre world of those whose lives revolve around the deceased and their disposal.

But does an obsession with death make for a killer? And what horrors will greet them when they finally find the dead place?

Praise for `The Dead Place':

`A dark Derbyshire mystery...not for the squeamish' Daily Mail

'Endows the traditional crime story with a literary strength that lifts it above the general ruck... He gives a satisfying read rather than a quick fix' Independent

`In this atmospheric debut, Stephen Booth makes high summer in Derbyshire as dark and terrifying as midwinter' Val McDermid

`Black Dog sinks its teeth into you and doesn't let go ... A dark star may be born!' Reginald Hill

Stephen Booth was born in the Lancashire mill town of Burnley and has remained rooted to the Pennines during his career as a newspaper journalist. He lives with his wife Lesley in a former Georgian dower house in Nottinghamshire and his interests include folklore, the Internet and walking in the hills of the Peak District. `The Dead Place' is the sixth in the series.

GOR000724107
The Dead Place (Cooper and Fry Crime Series, Book 6) by Stephen Booth
Stephen Booth
Cooper and Fry Crime Series
Used - Very Good
Paperback
HarperCollins Publishers
2006-02-01
608
0007172087
9780007172085
Short-listed for Theakston's Old Peculier Crime Novel of the Year 2007
Book picture is for illustrative purposes only, actual binding, cover or edition may vary.
This is a used book - there is no escaping the fact it has been read by someone else and it will show signs of wear and previous use. Overall we expect it to be in very good condition, but if you are not entirely satisfied please get in touch with us.