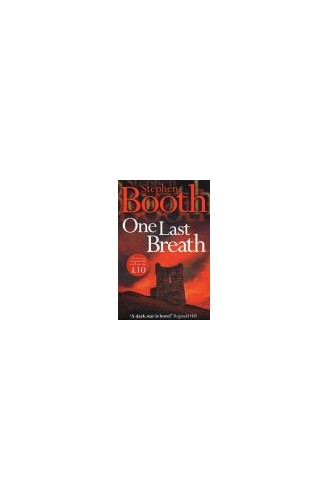 One Last Breath
by Stephen Booth

Major new psychological Peak District thriller from the acclaimed author of Blood on the Tongue and Blind to the Bones.

Major new psychological Peak District thriller from the acclaimed author of Blood on the Tongue and Blind to the Bones.

The vast labyrinth of caverns, passages and subterranean rivers beneath the Peak District are a major tourist attraction. But this summer not all the darkness is underground, and not all the devils are folk legends. Mingling with the holidaymakers is a convicted killer, bent on revenge.

Fourteen years ago Mansell Quinn was sentenced to life imprisonment for stabbing his lover to death. Now he's out and within a matter of hours his ex-wife is found dead - a new identity and a new home no safeguard against murder.

Looking to the original case files for clues to the fugitive's wherabouts, detectives Diane Fry and Ben Cooper discover there may be other potential victims out there. And as the son of the officer responsible for putting Quinn behind bars, Ben realizes that his own name could be high on the list.

Praise for Blind to the Bones:
`This is another very fine book, masterfully plotted and filled with real flesh-and-blood personalities.' Susanna Yager, Daily Telegraph

Praise for Stephen Booth:
`The complex relationship between [Cooper and Fry] is excellently drawn, and is combined with an intriguing plot and a real sense of place: Stephen Booth is an author to keep an eye on.' T J Binyon, Evening Standard

`Black Dog sinks its teeth into you and doesn't let go ... A dark star may be born!' Reginald Hill

'Best traditional crime novel of the year.'
Independent, Books of the Year

Stephen Booth was a journalist for twenty-five years until he turned to writing crime full time in 2001. This is the fifth novel in his series set in the Peak District, and follows on from the success of Black Dog, Dancing with the Virgins, Blood on the Tongue and Blind to the Bones.

GOR002820838
One Last Breath (Cooper and Fry Crime Series, Book 5) by Stephen Booth
Stephen Booth
Cooper and Fry Crime Series
Used - Very Good
Paperback
Unknown
0
0007172036
9780007172030
N/A
Book picture is for illustrative purposes only, actual binding, cover or edition may vary.
This is a used book - there is no escaping the fact it has been read by someone else and it will show signs of wear and previous use. Overall we expect it to be in very good condition, but if you are not entirely satisfied please get in touch with us.