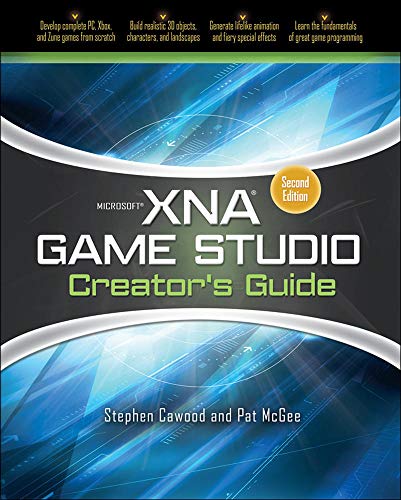 In Stock
£5.99
A fully updated guide to the latest release of the world's most popular free game development platform
Very Good Good
5 in stock

Publisher's Note: Products purchased from Third Party sellers are not guaranteed by the publisher for quality, authenticity, or access to any online entitlements included with the product.

Stephen Cawood (Vancouver, BC) is a SharePoint MVP and former Microsoft Program Manager on the MCMS and SHarePoint product teams. During his time on the SharePoint development team, Stephen wrote specifications for SharePoint. He is currently the Director of Product Marketing and Chief SharePoint Evangelist at Metalogix Software. Stephen has presented twice at the Microsoft SharePoint Conference, as well as the SharePoint Online Roadshow. He is also the founder of the Halifax SharePoint Users group. Stephen has written a number of books including How to Do Everything: SharePoint 2010 (McGraw-Hill), Content Management Server 2002: A Complete Guide and two editions of Microsoft XNA Game Studio Creators Guide. He has received three patent awards for his work on web-based content management. Pat McGee is the Lead Instructor and curriculum developer for the Software Systems Developer program at the British Columbia Institute of Technology. A former game programmer, McGee has co-authored books on Microsoft XNA Game Studio and is a recipient of Microsofts Most Valuable Professional award for DirectX and XNA. You may contact the author at http://HandsOnCoding.Net.

GOR004792642
Microsoft XNA Game Studio Creator's Guide, Second Edition by Stephen Cawood
Stephen Cawood
Used - Very Good
Paperback
McGraw-Hill Education - Europe
2009-05-01
560
0071614060
9780071614061
N/A
Book picture is for illustrative purposes only, actual binding, cover or edition may vary.
This is a used book - there is no escaping the fact it has been read by someone else and it will show signs of wear and previous use. Overall we expect it to be in very good condition, but if you are not entirely satisfied please get in touch with us.