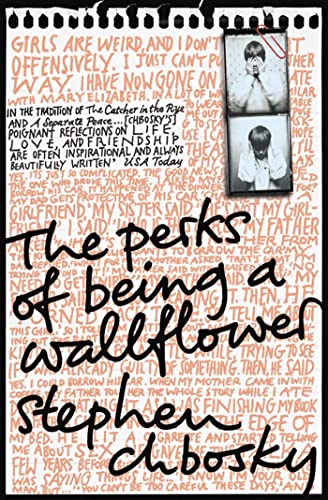 The Perks of Being a Wallflower
by Stephen Chbosky

In Stock
£3.29
A powerful and perceptive coming-of-age story, in the tradition of The Catcher in the Rye, from a talented young filmmaker, screenwriter and novelist.
Very Good Good Well Read
284 in stock

The Perks of Being a Wallflower Summary

The Perks of Being a Wallflower by Stephen Chbosky

The Perks of Being a Wallflower is a deeply affecting coming-of-age story that will spirit you back to those wild and poignant roller-coaster days known as growing up. Now a major motion picture starring Emma Watson and Logan Lerman. Stephen Chbosky's new film Wonder, starring Owen Wilson and Julia Roberts is out now.

Charlie is a freshman. And while he's not the biggest geek in the school, he is by no means popular. Shy, introspective, intelligent beyond his years yet socially awkward, he is a wallflower, caught between trying to live his life and trying to run from it. Charlie is attempting to navigate his way through uncharted territory: the world of first dates and mix-tapes, family dramas and new friends; the world of sex, drugs, and The Rocky Horror Picture Show, when all one requires is that perfect song on that perfect drive to feel infinite. But Charlie can't stay on the sideline forever. Standing on the fringes of life offers a unique perspective. But there comes a time to see what it looks like from the dance floor.

'A coming of age tale in the tradition of The Catcher in the Rye and A Separate Peace... often inspirational and always beautifully written' USA Today

Stephen Chbosky grew up in Pittsburgh, Pennsylvania, and graduated from the University of Southern California's Filmic Writing Program. His first film, The Four Corners of Nowhere, premiered at Sundance Film Festival and went on to win Best Narrative Feature honors at the Chicago Underground Film Festival. He helped edit and contributed material to John Leguizamo's Broadway show, sexaholix. He also edited Pieces, a collection of short stories for Pocket Books. Most recently, he wrote the screenplay for the critically acclaimed film adaptation of Rent. He also co-created and served as executive producer of the post-apocalyptic drama, Jericho, which found a place in television history when its cancellation prompted fans to send over 40,000 pounds of nuts to the network in protest. The Perks of Being a Wallflower is his first novel. As well as being an author, Steven Chbosky is a film director and screenwriter. He lives in Los Angeles.

GOR001517593
The Perks of Being a Wallflower by Stephen Chbosky
Stephen Chbosky
Used - Very Good
Paperback
Simon & Schuster Ltd
2009-02-02
240
1847394078
9781847394071
N/A
Book picture is for illustrative purposes only, actual binding, cover or edition may vary.
This is a used book - there is no escaping the fact it has been read by someone else and it will show signs of wear and previous use. Overall we expect it to be in very good condition, but if you are not entirely satisfied please get in touch with us.