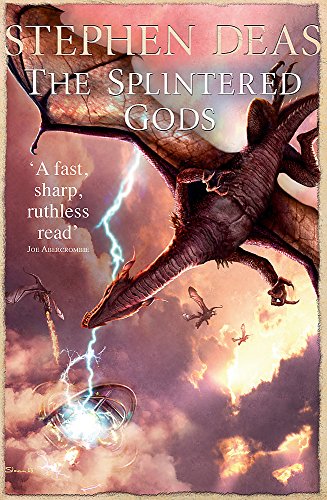 The Splintered Gods
by Stephen Deas

The Splintered Gods by Stephen Deas

Praised by the likes of Joe Abercrombie and Brent Weeks, Stephen Deas has made dragons his own.

Captured by an unknown enemy and forced to wage war on his rivals, the Dragon Queen has found herself hated and feared by all the people of this new land. There is little they can do to hurt her while she has her dragon, but she cannot escape while the magic necklace she is forced to wear remains active - or it will throttle her. And the enemies of her new master are gathering for revenge ...

Lost in a body that isn't his own, Berren - the Bloody Judge - continues his search for the man who stole his life. Accompanied by a single Adamantine soldier, they scrabble to survive in a world shaken by the Dragon Queen's attack and suspicious of all those who are strangers. But there is another power inside Berren, one which escapes when he is in danger and has the habit of disintegrating those around him. And that power has its own agenda ... One that will lead it to the Dragon Queen, and battle.

The critics, fellow authors and readers alike are agreed - if you love dragons and epic fantasy, Stephen Deas is the writer for you. The man who brought dragons back to their full glory, might and terror.

You will also find magically flying ships, enchantresses who can mould 'gold glass' to their will and alchemists all playing a part in this action filled story of discovery * Nerdly.co.uk *

Stephen Deas was born in 1968. He once set fire to Wales. Well one bit of Wales. Twice. When not burning principalities, he played too much D&D. Despite this he managed to study theoretical physics at Cambridge, get a job at BAE, marry and have two children. He now lives in Essex. With THE ADAMANTINE PALACE and its sequels he returned to his first love: that of setting fire to things.

GOR010687468
The Splintered Gods by Stephen Deas
Stephen Deas
Used - Like New
Paperback
Orion Publishing Co
2015-03-12
544
0575100583
9780575100589
N/A
Book picture is for illustrative purposes only, actual binding, cover or edition may vary.
The book has been read, but looks new. The book cover has no visible wear, and the dust jacket is included if applicable. No missing or damaged pages, no tears, possible very minimal creasing, no underlining or highlighting of text, and no writing in the margins.