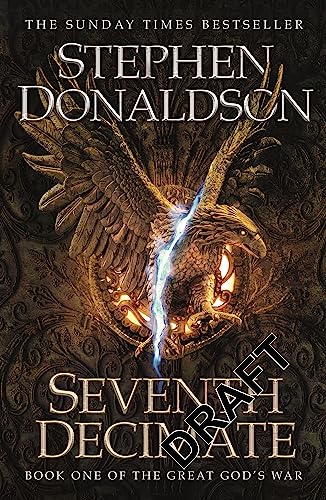 Used Price
£4.49
New RRP £9.99
Free Shipping in the UK
A magical war. A starving country. A desperate prince. The first volume of THE GREAT GOD'S WAR, from the author of the bestselling CHRONICLES OF THOMAS COVENANT
Reviews:
Trustpilot
Very Good

The war between Amika and Belleger has raged for generations. Its roots lie in the distant past, beyond memory. Sorcerers from both sides rain destruction down on the battlefield, wielding the six deadly Decimates of fire, earth, wind, water, lightning, and pestilence.

Prince Bifalt hopes that Belleger's new weapons technology, the rifle, will provide a decisive advantage. But when Belleger's sorcerers are mysteriously deprived of their magical abilities, leaving them unable to defend against Amika, he must set aside his own deep hatred of sorcery and work to solve this new enigma.

Grasping at any chance to save his beloved homeland, Prince Bifalt of Belleger sets out on a hazardous journey across the unmapped wastelands to the east. With Elgart, his last comrade, Bifalt pursues the long-hidden trail of the one object that might be able to turn the tide of the endless war - a book entitled The Seventh Decimate.

The events that unfold force Prince Bifalt to weigh his stubbornness, his patriotism, and his hatred for sorcerers against his sense of loyalty and of what he knows to be right. And as he learns, Amika and Belleger may simply be pawns within an even larger struggle...

Told with a masterful vigour. * SFX MAGAZINE *
A good, easy read with plenty of interesting characters and some really harrowing scenes of survival. For those reasons alone, it's worth taking a look. * DEN OF GEEK *
Absorbing and credible. * MORNING STAR *

Stephen Donaldson lived in India for 13 years with his father, a medical missionary, who worked extensively with lepers; it was here that he conceived the character of Thomas Covenant. He was awarded the John W. Campbell Award as Best Writer of the Year for The Chronicles of Thomas Covenant The Unbeliever, which, with the sequel trilogy, became instant bestsellers. He is also the author of the fantasy duology 'Mordant's Need', the SF epic quintet 'The Gap', and a number of mysteries written under the pseudonym Reed Stephens. He won the World Fantasy Award in 2000. The four books of The Last Chronicles of Thomas Covenant have been acclaimed worldwide.

GOR009339335
Seventh Decimate: The Great God's War Book One by Stephen Donaldson
Stephen Donaldson
Great God's War
Used - Very Good
Paperback
Orion Publishing Co
2018-06-12
320
1473221684
9781473221680
N/A
Book picture is for illustrative purposes only, actual binding, cover or edition may vary.
This is a used book - there is no escaping the fact it has been read by someone else and it will show signs of wear and previous use. Overall we expect it to be in very good condition, but if you are not entirely satisfied please get in touch with us.