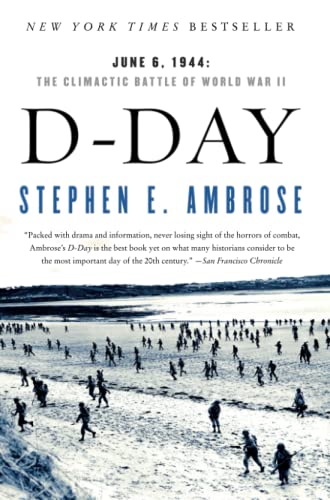 In Stock
£5.99
Chronicles the events, politics, and personalities of this pivotal day in World War II, shedding light on the strategies of commanders on both sides and the ramifications of the battle.
Like New Very Good
Only 1 left

Stephen E. Ambrose draws from more than 1,400 interviews with American, British, Canadian, French, and German veterans to create the preeminent chronicle of the most important day in the twentieth century. Ambrose reveals how the original plans for the invasion were abandoned, and how ordinary soldiers and officers acted on their own initiative.

"D-Day" is above all the epic story of men at the most demanding moment of their existence, when the horrors, complexities, and triumphs of life are laid bare. Ambrose portrays the faces of courage and heroism, fear and determination -- what Eisenhower called "the fury of an aroused democracy" -- that shaped the victory of the citizen soldiers whom Hitler had disparaged.

Raleigh Trevelyan The New York Times Book Review D-Day is mostly about people, but goes even further in evoking the horror, the endurance, the daring and, indeed, the human failings at Omaha Beach...Outstanding.
John Lehman The Wall Street Journal Definitive...His evidence is overwhelming.
Christopher Lehmann-Haupt The New York Times Reading this history, you can understand why for so many of its participants, despite all the death surrounding them, life revealed itself in that moment at that place.
Thomas B. Buell Chicago Tribune Historians and public alike should be profoundly grateful to Ambrose...for assembling this comprehensive and permanent record that will be forever a resource for remembering Normandy.

Stephen E. Ambrose was a renowned historian and acclaimed author of more than thirty books. Among his New York Times bestsellers are Nothing Like It in the World, Citizen Soldiers, Band of Brothers, D-Day - June 6, 1944, and Undaunted Courage. Dr. Ambrose was a retired Boyd Professor of History at the University of New Orleans and a contributing editor for the Quarterly Journal of Military History.

GOR010457819
D Day, June 6, 1944: The Climactic Battle of World War II by Stephen E. Ambrose
Stephen E. Ambrose
Used - Like New
Paperback
Simon & Schuster
1995-06-01
320
068480137X
9780684801377
N/A
Book picture is for illustrative purposes only, actual binding, cover or edition may vary.
This is a used book - there is no escaping the fact it has been read by someone else and it will show signs of wear and previous use. Overall we expect it to be in very good condition, but if you are not entirely satisfied please get in touch with us.