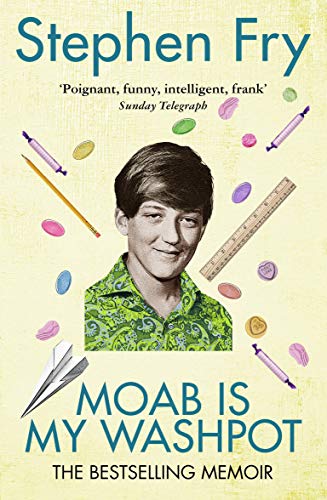 Moab Is My Washpot
by Stephen Fry

In Stock
£4.49
Moab is My Washpot is in turns funny, shocking, tender, delicious, sad, lyrical, bruisingly frank and addictively readable.
Like New Very Good
Only 4 left

Moab Is My Washpot Summary

Moab Is My Washpot by Stephen Fry

Moab is My Washpot is in turns funny, shocking, tender, delicious, sad, lyrical, bruisingly frank and addictively readable. Stephen Fry's bestselling memoir tells how, sent to a boarding school 200 miles from home at the age of seven, he survived beatings, misery, love, ecstasy, carnal violation, expulsion, imprisonment, criminal conviction, probation and catastrophe to emerge, at eighteen, ready to try and face the world in which he had always felt a stranger. Fry writes with the wit to which we have become accustomed, but with shocking candour too. In an age of glossy celebrity autobiographies, Moab is My Washpot sets the high standard to which others should aspire.

Moab Is My Washpot Reviews

"One of the most poignant, funny, intelligent, frank and horribly addictive books you're likely to read all year" * Sunday Telegraph *
"Stephen Fry is one of the great originals... This autobiography of his first twenty years is a pleasure to read, mixing outrageous acts with sensible opinions in bewildering confusion... That so much outward charm, self-awareness and intellect should exist alongside behaviour that threatened to ruin the lives of innocent victims, noble parents and Fry himself, gives the book a tragic grandeur and lifts it to classic status." * Financial Times *
"A remarkable, perhaps even unique, exercise in autobiography... that aroma of authenticity that is the point of all great autobiographies; of which this, I rather think, is one." * Evening Standard *
"He writes superbly about his family, about his homosexuality, about the agonies of childhood... some of his bursts of simile take the breath away... his most satisfying and appealing book so far." * Observer *
"This is one of the most extraordinary and affecting biographies I have read... Stephen is... painfully honest when trying to grapple with his ever-present demons, and often, as you might expect, very funny... I hope to goodness there'll be a sequel. I can't wait for more." * Daily Mail *

Stephen Fry was born in Hampstead in 1957 and, following a troubled adolescence, went on to study English Literature at Queen's College, Cambridge. As well as being the bestselling author of four novels, The Stars' Tennis Balls, Making History, The Hippopotamus, and The Liar, and two volumes of his autobiography, Fry played Peter in Peter's Friends, Wilde in the film Wilde, Jeeves in the television series Jeeves & Wooster and (a closely guarded show-business secret, this) Laurie in the television series Fry & Laurie. More recently, he presented Stephen Fry: The Secret Life of the Manic Depressive, his groundbreaking documentary on bipolar disorder, to huge critical acclaim. And his legions of fans tune in to watch him host the popular quiz show QI each week.

GOR010460080
Moab Is My Washpot by Stephen Fry
Stephen Fry
Used - Like New
Paperback
Cornerstone
2004-08-05
448
0099457040
9780099457046
N/A
Book picture is for illustrative purposes only, actual binding, cover or edition may vary.
The book has been read, but looks new. The book cover has no visible wear, and the dust jacket is included if applicable. No missing or damaged pages, no tears, possible very minimal creasing, no underlining or highlighting of text, and no writing in the margins.