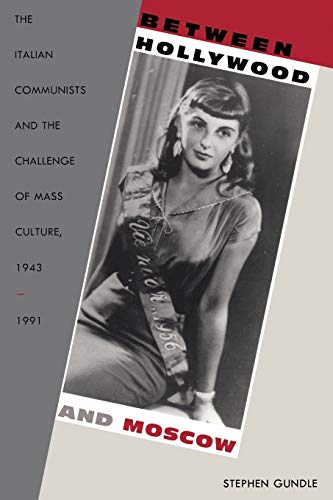 Between Hollywood and Moscow
by Stephen Gundle

In Stock
£14.99
A study of the cultural policies and activities of the Italian Communist Party, following the collapse of fascism and the struggle with popular consumer culture that led to its demise in 1991. This book is intended to those with an interest in modern Italy, the European left, political science, and media studies.
Very Good
Only 1 left

Between Hollywood and Moscow Summary

Between Hollywood and Moscow: The Italian Communists and the Challenge of Mass Culture, 1943-1991 by Stephen Gundle

In the postwar years, Italy underwent a far-reaching process of industrialization that transformed the country into a leading industrial power. Throughout most of this period, the Italian Communist Party (PCI) remained a powerful force in local government and civil society. However, as Stephen Gundle observes, the PCI was increasingly faced with challenges posed by modernization, particularly by mass communication, commercial cultural industries, and consumerism. Between Hollywood and Moscow is an analysis of the PCI's attempts to cope with these problems in an effort to maintain its organization and subculture.
Gundle focuses on the theme of cultural policy, examining how the PCI's political strategies incorporated cultural policies and activities that were intended to respond to the Americanization of daily life in Italy. In formulating this policy, Gundle contends, the Italian Communists were torn between loyalty to the alternative values generated by the Communist tradition and adaptation to the dominant influences of Italian modernization. This equilibrium eventually faltered because the attractive aspects of Americanization and pop culture proved more influential than the PCI's intellectual and political traditions.
The first analysis in English of the cultural policies and activities of the PCI, this book will appeal to readers with an interest in modern Italy, the European left, political science, and media studies.

Between Hollywood and Moscow Reviews

"Stephen Gundle's book is a highly original contribution to our knowledge of the culture and politics of modern Italy, combining as it does theoretical sophistication with extensive empirical research."-Paul Ginsborg, Universita degli Studi di Firenze
"The book is an original contribution to knowledge based on a prodigious amount of research. . . . A significant achievement." -- Stephen Hellman * International History Review *
"Between Hollywood and Moscow is an outstanding work that treats the effects of modernization and the development of a mass consumer society in Italy in an original and illuminating manner. It restores a sense of the importance of culture as an integral part of political strategizing and communicates the shifting meanings of culture over four decades of Italian history."-Ruth Ben-Ghiat, New York University
"A comprehensive account of the cultural policies of the Italian Communist Party. This is a very useful book containing much relevant information on a surprisingly under-researched topic." -- Donald Sassoon * Modern Italy *
"Between Hollywood and Moscow makes an original contribution to the study of the PCI and post-war Italy in general from a cultural point of view, and reveals the importance of specific cultural strategies and transformations in the political history of the PCI."-John Dickie, University College, London

Stephen Gundle is Senior Lecturer and Head of the Department of Italian at Royal Holloway, the University of London.

Acknowledgments
List of Illustrations
Introduction
Chapter One: Between Hollywood and Moscow
Politics, Culture, and Society after the Fall of Fascism
Chapter Two: Bread, Love, and Political Strife
Cold War Communism and the Development of Cultural Policy
Chapter Three: What's Good for Fiat is Good for Italy
Television, Consumerism, and Party Identity in the 1950s
Chapter Four: From Elvis Presley to Ho Chi Minh
Youth Culture and Cultural Conflict Between the Centre Left and the Hot Autumn
Chapter Five: Crisis, Austerity, Solidarity
The Question of Hegemony in the 1970s
Chapter Six: Welcome to Prosperity
Economic Growth and the Erosion of Left-Wing Culture

Chapter Seven: The Last Tango
The Collapse of Communism and the Dissolution of the PCI

GOR009952953
Between Hollywood and Moscow: The Italian Communists and the Challenge of Mass Culture, 1943-1991 by Stephen Gundle
Stephen Gundle
American Encounters/Global Interactions
Used - Very Good
Paperback
Duke University Press
2000-12-01
280
0822325632
9780822325635
N/A
Book picture is for illustrative purposes only, actual binding, cover or edition may vary.
This is a used book - there is no escaping the fact it has been read by someone else and it will show signs of wear and previous use. Overall we expect it to be in very good condition, but if you are not entirely satisfied please get in touch with us.