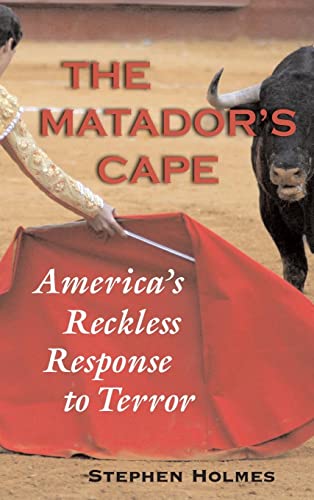 The Matador's Cape
by Stephen Holmes

In Stock
£5.99
The Matador's Cape explains how the catastrophic turn in American national-security policy since 9/11 stems from Washington's chronic inability to bring 'the enemy' into focus.
Well Read
Only 1 left

The Matador's Cape delves into the causes of the catastrophic turn in American policy at home and abroad since 9/11. In a collection of searing essays, the author explores Washington's inability to bring 'the enemy' into focus, detailing the ideological, bureaucratic, electoral and (not least) emotional forces that severely distorted the American understanding of, and response to, the terrorist threat. He also shows how the gratuitous and disastrous shift of attention from al Qaeda to Iraq was shaped by a series of misleading theoretical perspectives on the end of deterrence, the clash of civilizations, humanitarian intervention, unilateralism, democratization, torture, intelligence gathering and wartime expansions of presidential power. The author's breadth of knowledge about the War on Terror leads to conclusions about present-day America that are at once sobering in their depth of reference and inspiring in their global perspective.

'Holmes has written a powerful and philosophically erudite survey of what we think we understand about the 9/11 attacks.' Middle East Online
"Holmes is emerging as the foremost post-9/11 'character reader'.... The book is political psychology at its best... he writes directly, simply, elegantly, informally without ever becoming too colloquial." Jon Elster, Robert K. Merton Professor of Social Science, Columbia University
"A brilliant dissection of the deeper causes of an American tragedy." Bruce Ackerman, Professor of Law, Yale University Law School
"In these powerfully-argued essays, Stephen Holmes brilliantly illuminates not only why America's 'war' against Islamic terrorism has gone so wrong, but also what can be done to protect both the nation and its democratic institutions. No book could be timelier or more urgently needed." Ronald Steel, Professor of International Relations, University of Southern California
"Stephen Holmes' impressively researched, deeply felt, and strongly argued book is an extremely valuable guide to answering the riddle of why the Bush administration reacted so disastrously to the terrorist attacks on 9/11, and in doing so fell straight into the trap Al Qaeda had set for America." Anatol Lieven, Senior Research Fellow, New American Foundation
"The Matador's Cape, by one of America's most brilliant political philosophers, not only provides a devastating analysis of the current 'war on terror', but suggests new ways for the West to deal with the very real dangers facing it." Tzvetan Todorov, Director of Research, National Centre for Scientific Research, Paris
"The Matador's Cape is a trenchant critical analysis of the thinking inside the Bush administration and among its defenders about the response to 9/11 and the decision to go to war in Iraq. Stephen Holmes shows just how oversimplified, contradictory, and confused their thinking was--and how dangerous it is to our true interests in security and freedom." Paul Starr, Co-editor of The American Prospect and author of Freedom's Power: The True Force of Liberalism.
"The Matador's Cape - the title is an allusion to Osama bin Laden's boast that the 9/11 attacks were designed to bait the United States into a berserk overreaction - is a collection of previously published essays repackaged into a semi-coherent, but often sharp, narrative of America's "reckless response" to 9/11. Holmes identifies several reasons...for the administration's decision to declare war on terrorism rather than on Islamic radicalism." -Kevin Drum, Mother Jones
"With this book, Stephen Holmes largely succeeds in elevating criticism of contemporary American imperialism in the Middle East to a new level...Holmes has done a wonderful job of clearing the underbrush and preparing the way for the public to address this more or less taboo subject." -Chalmers Johnson, tomdispatch.com
"Holmes provides numerous useful insights." -David P. Nalbone, Contemporary Psychology APA Review of Books
"...the author certainly has achieved his purpose of highlighting why United States policymakers must re-examine counter terrorism strategies and policies. Holmes has effectively introduced more clarity and understanding to this tragic unfolding epic and thus has made an important contribution to the literature." -American Review of Politics

After receiving his PhD from Yale in 1976, Holmes taught briefly at Yale and Wesleyan Universities before becoming a member of the Institute for Advanced Study in Princeton in 1978. From Princeton, he moved to Harvard University's Department of Government, where he stayed until 1985, the year he joined the faculty at the University of Chicago. At the University of Chicago, Professor Stephen Holmes served as Director of the Center for the Study of Constitutionalism in Eastern Europe and as editor-in-chief of the East European Constitutional Review. He has also been the Director of the Soros Foundation program for promoting legal reform in Russia and Eastern Europe. Holmes' research centers on the history of European liberalism and the disappointments of democracy and economic liberalization after communism. In 1984, he published Benjamin Constant and the Making of Modern Liberalism. Since then, he has published a number of articles on democratic and constitutional theory as well as on the theoretical origins of the welfare state. In 1988, he was awarded a Guggenheim Fellowship to complete a study of the theoretical foundations of liberal democracy. He was a member of the Wissenschaftskolleg in Berlin during the 1991 academic year. His Anatomy of Antiliberalism appeared in 1993. And in 1995, he published Passions and Constraint: The Theory of Liberal Democracy; in this work, Holmes presents a spirited vindication of classical liberalism and its notions of constitutional government. He coauthored, with Cass Sunstein, a book on The Cost of Rights (Norton, 1998).

Introduction; Part I. The Terrorist Enigma: 1. Did religious extremism cause 9/11?; Part II: Show of Force: 2. Why military superiority breeds illusions; 3. How the war was lost; 4. Radicals trapped in the past; 5. A self-inflicted wound; Part III. False Templates: 6. Searching for a new enemy after the Cold War; 7. Humanitarianism with teeth; 8. The war of the liberals; 9. The neoconservative intifada; Part IV. Waiving the Rules: 10. Liberalism strangled by war; 11. The unilateralist curse; 12. Battling lawlessness with lawlessness; 13: The infallibility trap; Conclusion.

GOR010214609
The Matador's Cape: America's Reckless Response to Terror by Stephen Holmes
Stephen Holmes
Used - Well Read
Hardback
Cambridge University Press
2007-04-23
378
0521875161
9780521875165
N/A
Book picture is for illustrative purposes only, actual binding, cover or edition may vary.
This is a used book. We do our best to provide good quality books for you to read, but there is no escaping the fact that it has been owned and read by someone else previously. Therefore it will show signs of wear and may be an ex library book.