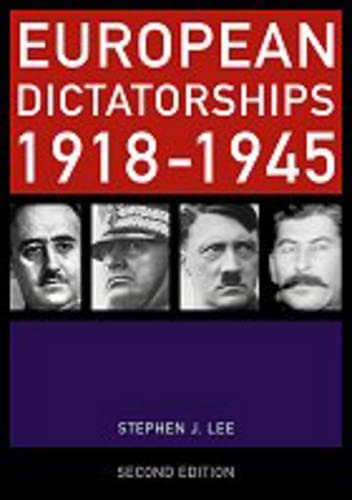 In Stock
£7.99
This work describes the course of dictatorship in Europe before and during World War II, concentrating in particular on Russia, Italy and Germany, but also covering Spain, Portugal, and the states of Central and Eastern Europe.
Very Good Good Well Read
6 in stock

European Dictatorships surveys the extraordinary circumstances leading to, and arising from, the transformation of over half of Europe's states to dictatorships between the first and the second World Wars. Following the great success and acclaim of the first edition, the book has been thoroughly updated to include recent historical research, largely prompted by the collapse of the Soviet Union and the subsequent transformation of the political map of Europe. The European Dictatorships describes the course of dictatorship in Europe before and during the Second World War and examines the phenomenon of dictatorship itself and the widely different forms it can take. From the notorious dictatorships of Mussolini, Hitler and Stalin to less well-known states and leaders, this book scrutinizes the experiences of: Russia; Germany; Italy; Spain and Portugal; Central and Eastern European states, such as Hungary, Bulgaria, Greece, Austria, Bulgaria and Albania; Norway.

"Lee should be commended on his excellent narrative accounts of these complex and diverse cases. The chapters are well organized and the prose is generally clear and direct. Lee also has a talent fo focusing solely on the most important details and for making these details come alive."
-H-Net Reviews