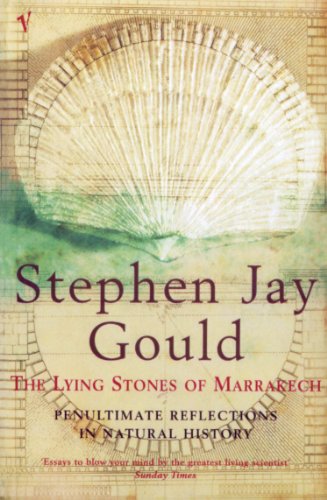 The Lying Stones of Marrakech
by Stephen Jay Gould

In Stock
£4.49
Stephen Jay Gould's writing remains the modern standard by which popular science writing is judged. Ever since the late 1970s up until till his death in 2002, his monthly essay in Natural History and his full-length books bridged the yawning gap between science and wider culture.
Very Good
Only 2 left

The Lying Stones of Marrakech Summary

Stephen Jay Gould's writing remains the modern standard by which popular science writing is judged. Ever since the late 1970s up until till his death in 2002, his monthly essay in Natural History and his full-length books bridged the yawning gap between science and wider culture. In this fascinating new collection of essays from Natural History, Gould applied biographical perspectives to the illumination of key scientific concepts and their history, ranging from the origins of palaeontology to modern eugenics and genetic engineering. The essays brilliantly illuminate and elucidate the puzzles and paradoxes great and small that have fuelled the enterprise of science and opened our eyes to a world of unexpected wonders.

The Lying Stones of Marrakech Reviews

"Gould has an infectious and joyful understanding of the intricacies of his subject, be it an appreciation of Carl Sagan, the dangers of scientific fraud or a brief homage to Mozart. With Lying Stones we have one of our last chances to appreciate these virtues and assess a scientiest who has become a Western Science phenomenon. His quirkiness, his ability to coalesce seemingly unconnected topics, and his individual passion are qualities that help make him such a powerful writer" * Observer *
"It is a hallmark of Stephen Jay Gould's craft, brilliant paleontologist that he is, to retrieve long-buried evidence from oblivion and breathe vibrant life into it, making fascinating connections between science and the human predicament... extraordinary" * Sunday Times *
"The most readable of scientists. Whether linking the death of textile workers in New York with Darwin's theory of natural selection, or the sale of fake fossils in Morocco with an 18th-century paleontological hoax, Gould proves that he is a master bridge builder" * Financial Times *
"One of the best essayists in the business. He uses his wide background knowledge (anything from baseball to the political history of revolutionary France) as a bridge to entice non-scientists into sharing the excitement of scientific discovery and the curious, convoluted path of new ideas through history" * Scotsman *

Stephen Jay Gould was the Alexander Agassiz Professor of Zoology and Professor of Geology at Harvard University, and the Vincent Astor Visiting Professor of Biology at New York University. During his illustrious career, his publications included Ever Since Darwin, Eight Little Piggies, Life's Grandeur, Questioning the Millenium, Leonardo's Mountain of Clams and the Diet of Worms, Bully for Brontosaurus and Wonderful Life. Wonderful Life won the Science Book Prize for 1991. Stephen Jay Gould died in 2002, aged 60.

GOR001126437
The Lying Stones of Marrakech: Penultimate Reflections in Natural History by Stephen Jay Gould
Stephen Jay Gould
Used - Very Good
Paperback
Vintage Publishing
2001-05-02
384
0099285835
9780099285830
N/A
Book picture is for illustrative purposes only, actual binding, cover or edition may vary.
This is a used book - there is no escaping the fact it has been read by someone else and it will show signs of wear and previous use. Overall we expect it to be in very good condition, but if you are not entirely satisfied please get in touch with us.