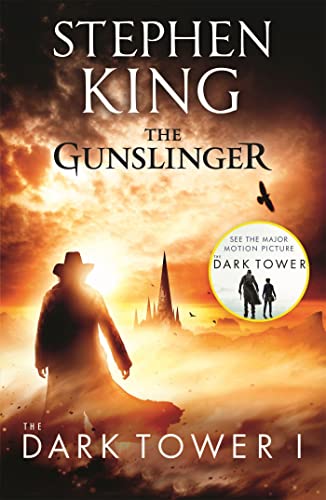 Dark Tower I: The Gunslinger
by Stephen King

Dark Tower I: The Gunslinger Summary

Dark Tower I: The Gunslinger: (Volume 1) by Stephen King

'The man in black fled across the desert, and the gunslinger followed.' The iconic opening line of Stephen King's groundbreaking series, The Dark Tower, introduces one of his most enigmatic and powerful heroes: Roland of Gilead, the Last Gunslinger.

Roland is a haunting figure, a loner, on a spellbinding journey toward the mysterious Dark Tower, in a desolate world which frighteningly echoes our own.

On his quest, Roland begins a friendship with a kid from New York named Jake, encounters an alluring woman and faces an agonising choice between damnation and salvation as he pursues the Man in Black.

Dark Tower I: The Gunslinger Reviews

GOR007834433
Dark Tower I: The Gunslinger: (Volume 1) by Stephen King
Stephen King
Used - Like New
Paperback
Hodder & Stoughton General Division
2012-02-16
304
1444723448
9781444723441
N/A
Book picture is for illustrative purposes only, actual binding, cover or edition may vary.
The book has been read, but looks new. The book cover has no visible wear, and the dust jacket is included if applicable. No missing or damaged pages, no tears, possible very minimal creasing, no underlining or highlighting of text, and no writing in the margins.