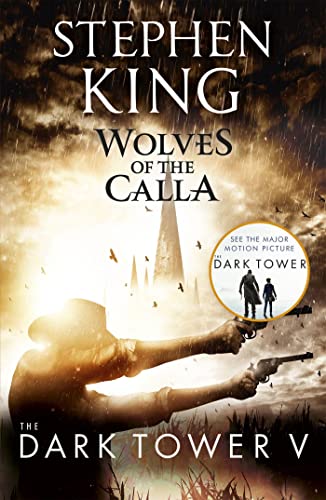 The Dark Tower V: Wolves of the Calla
by Stephen King

The Dark Tower V: Wolves of the Calla Summary

The Dark Tower V: Wolves of the Calla: (Volume 5) by Stephen King

WOLVES OF THE CALLA is the fifth volume in Stephen King's epic Dark Tower series. The Dark Tower is now a major motion picture starring Matthew McConaughey and Idris Elba.

In the fifth novel in StephenKing's bestselling fantasy series, Roland and his ka-tet are bearing through the forests of the Mid-World on their journey to the Dark Tower.

Tracking their every move is a group of farmers from the town of Calla Bryn Sturgis. The trackers have been warned that the Wolves, a band of masked riders, are about to gallop out of the dark land of Thunderclap and raid their town. And they want to enlist the help of the four gunslingers.

How can Roland and his tet both protect the innocent community and return to New York to save our world's incarnation of the Dark Tower from the machinations of the evil Sombra Corporation?

Customer Reviews - The Dark Tower V: Wolves of the Calla

The Dark Tower V: Wolves of the Calla Reviews

GOR007253485
The Dark Tower V: Wolves of the Calla: (Volume 5) by Stephen King
Stephen King
Used - Like New
Paperback
Hodder & Stoughton
2012-02-16
816
1444723480
9781444723489
N/A
Book picture is for illustrative purposes only, actual binding, cover or edition may vary.
The book has been read, but looks new. The book cover has no visible wear, and the dust jacket is included if applicable. No missing or damaged pages, no tears, possible very minimal creasing, no underlining or highlighting of text, and no writing in the margins.