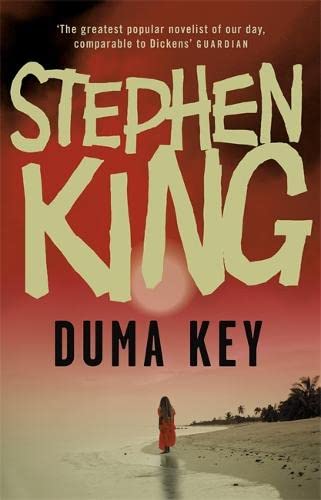 In Stock
£6.99
DUMA KEY combines the appeal of CELL and LISEY'S STORY - two of Stephen King's most successful hardbacks of all time - to take the legendary author to a whole new level.
Very Good Good
Only 3 left

DUMA KEY is the engaging, fascinating story of a man who discovers an incredible talent for painting after a freak accident in which he loses an arm.

He moves to a 'new life' in Duma Key, off Florida's West Coast; a deserted strip, part beach, part weed-tangled, owned by a patroness of the arts whose twin sisters went missing in the 1920s. Duma Key is where out-of-season hurricanes tears lives apart and a powerful undertow lures lost and tormented souls. Here Freemantle is inspired to paint the amazing sunsets. But soon the paintings become predictive, even dangerous. Freemantle knows the only way forward is to discover what happened to the twin sisters - and what is the secret of the strange old lady who holds the key?

The story is about friendship, about the bond between a father and his daughter. And about memory, truth and art. It is also is a metaphor for the life and inspiration of a writer, and an exploration of the nature, power and influence of fiction.

He has become a fascinating paradoxical figure, still seen as ultra-commercial but, in fact, increasingly highbrow and self-conscious * Sunday Times *
The scenes following Freemantle's physical recovery, of his anger and suicidal depression, are the author writing at his absolute best, immediately gripping the reader and putting him on the protagonist's side...King has become such a sophisticated writer that this novel is never less than page-turning * Matt Thorne, Independent on Sunday *
The theme of an artist enslaved and driven to madness by his own talent is not a new one for King, but the parallels with his own injuries and recovery - and his uncanny ability so spin a good yarn - mean the story always feels fresh...despite the pace and the pyrotechnics, the book still has a heart, which makes the idea of King's retirement the scariest prospect of all * TheLondonPaper *
The true narrative artist is a rare creature. Storytelling - the ability to make the listener or the reader need to know, demand to know, what happens next - is a gift...Stephen King, like Charles Dickens before him, has this gift in spades. * The Times on CELL *
Thrilling, genuinely terrifying, beautifully textured and full of wonderful invention * Daily Mail on LISEY'S STORY *
Very clever and brilliantly written . . . you won't use your mobile for days. * Guardian on CELL *
'As with all Stephen King novels, this book is sinister and surprising. You feels as though the individual characters are actually real. Another masterpiece.' * The Sun *
In many ways this is classic King, a thriller with agressively credible characters. * The Times *
If King is a modern-day Dickens, as some critics have suggested... then this is his David Copperfield, a book written with a deftness of touch and a sure command of the material that is breathtaking... at almost 600 pages, it's a doorstop of a book. But the story is so elegant and wide-ranging, and the three central characters so delicately evoked, that it feels far shorter. * Daily Mail *
This is a powerful piece of work and once the horrors kick in, the pace is relentless. Fresh and frightening and highly recommended. * Peter Guttridge, Observer *
Its moments of authentic terror and unease - which are good enough to rival anything else in King - spring from the author's deft command of pace and tone, from his evocation of the island's deceptive calm, and from the folky texture of his dialogue ... hard not to be gripped, which is testament to the propulsive power of the writing. * Sunday Telegraph *

GOR001010703
Duma Key by Stephen King
Stephen King
Used - Very Good
Hardback
Hodder & Stoughton General Division
2008-01-24
592
0340952199
9780340952191
N/A
Book picture is for illustrative purposes only, actual binding, cover or edition may vary.
This is a used book - there is no escaping the fact it has been read by someone else and it will show signs of wear and previous use. Overall we expect it to be in very good condition, but if you are not entirely satisfied please get in touch with us.