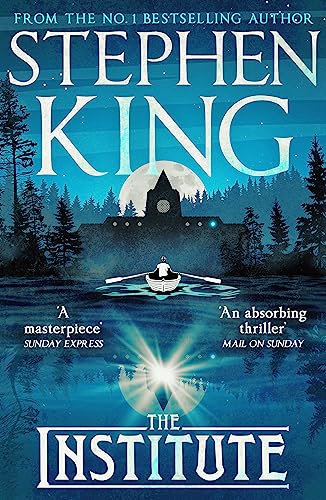 The Institute
by Stephen King

Used Price
£4.99
New RRP £8.99
Free Shipping in the UK
There's only one way out . . . the hugely anticipated paperback edition of King's bestselling hardback which combines the childhood camaraderie of IT with the suspense of THE OUTSIDER.
Very Good Good

The Institute by Stephen King

'An absorbing thriller' Mail on Sunday

NO ONE HAS EVER ESCAPED FROM THE INSTITUTE.

Luke Ellis, a super-smart twelve-year-old with an exceptional gift, is the latest in a long line of kids abducted and taken to a secret government facility, hidden deep in the forest in Maine.

Here, kids with special talents - telekinesis and telepathy - like Luke's new friends Kalisha, Nick and Iris, are subjected to a series of experiments.

There seems to be no hope of escape. Until Luke teams up with an even younger boy whose powers of telepathy are off the scale.

Meanwhile, far away in a small town in South Carolina, former cop Tim Jamieson, looking for the quiet life, has taken a job working for the local sheriff. He doesn't know he's about to take on the biggest case of his career . . .

THERE'S ONLY ONE WAY OUT.

'An epic tale of childhood betrayal and hope regained... an immersive tale full of suspense and thrills that will keep readers up late at night racing towards a heartbreaking yet glorious finale... a dazzling achievement' - Daily Express

A terrific book - a flat out pedal to the metal thriller. One of Stephen King's best -- Linwood Barclay
Once pigeon-holed as a 'horror-meister', King has become a formidably versatile author, enabling him to pull off a captivating, hybrid novel that shape-shifts through several genres * The Sunday Times *
A testament to the power of resilience and friendship . . . It does everything you'd expect of a masterpiece - and it is one * Sunday Express *
THE INSTITUTE will delight King's devoted readers and create a whole new generation of lifelong fans. The Master of Storytelling at his very best - which means better than anyone else -- Matt Thorne
Hums and crackles with delicious unease...King is supreme at crafting the building blocks of a story and laying them together in a slick, teasing and apparently simple way * Independent *
Stephen King has written the most readable and electrifying tale . . . a thrilling, chilling ride * Love Reading *
[King] has been a constant literary companion . . . I still look forward as much as I ever did to each new novel or short story collection. The Institute is another winner . . . It's familiar King territory and all the better for it. -- Conleth Hill * Guardian *
This hefty, provocative book will appeal particularly to King's long-standing fans. * Metro *
King knows what he is doing, and has done for a longtime. His pacing, ear for dialogue and pure storytelling ability are all on display in The Institute * Otago Daily Times *

King is described by the Guardian as 'one of the greatest storytellers of our time', by the
Mirror as a 'genius' and by The Sunday Times as 'one of the most fertile storytellers of the modern novel'. He is the author of more than sixty books including the No. 1 bestselling novel THE OUTSIDER, voted winner of the Goodreads Choice Award for best Mystery and Thriller 2018 and the classic IT, 'a book which speaks to everybody' - Guardian. Many of his titles have been turned into films, TV series and streamed events including MISERY, IT and THE SHAWSHANK REDEMPTION. His highly acclaimed novel THE INSTITUTE was a runaway bestseller in hardback, and won the Goodreads Choice Awards for best horror novel.

King was also the recipient of the 2003 National Book Foundation Medal for Distinguished Contribution to American Letters, in 2007 won the Grand Master Award from the Mystery Writers of America and in 2015 received America's National Medal of Arts. He lives with his wife, Tabitha King, in Maine.

GOR010667727
The Institute by Stephen King
Stephen King
Used - Very Good
Paperback
Hodder & Stoughton
2020-07-23
496
1529355419
9781529355413
N/A
Book picture is for illustrative purposes only, actual binding, cover or edition may vary.
This is a used book - there is no escaping the fact it has been read by someone else and it will show signs of wear and previous use. Overall we expect it to be in very good condition, but if you are not entirely satisfied please get in touch with us.