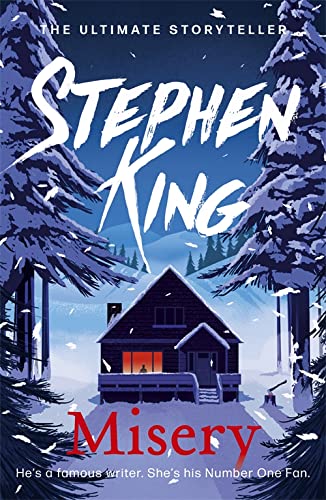 King's Classic bestseller about a famous novelist held hostage by his Number One Fan.

Misery Chastain is dead. Paul Sheldon has just killed her - with relief, with joy. Misery has made him rich; she was the heroine of a string of bestsellers. And now he wants to get on to some real writing.

That's when the car accident happens, and he wakes up in pain in a strange bed. But it isn't hospital. Annie Wilkes has pulled him from the wreck, brought him to her remote mountain home, splinted and set his mangled legs.

This terrifying story of imprisonment by a demented fan is one of the greatest thrillers ever written -- James Smythe
Not since Dickens has a writer had so many readers by the throat * Guardian *
King's new novel, about a writer held hostage by his self-proclaimed "number-one fan,'' is unadulteratedly terrifying. Paul Sheldon, a writer of historical romances, is in a car accident; rescued by nurse Annie Wilkes, he slowly realizes that salvation can be worse than death. Sheldon has killed off Misery Chastain, the popular protagonist of his Misery series and Annie, who has a murderous past, wants her back. Keeping the paralyzed Sheldon prisoner, she forces him to revive the character in a continuation of the series, and she reads each page as it comes out of the typewriter; there is a joyously Dickensian novel within a novel here, and it appears in faded typescript. Studded among the frightening moments are sparkling reflections on the writer and his audience, on the difficulties, joys and responsibilities of being a storyteller, on the nature of the muse, on the differences between "serious'' and "popular'' writing. Sheldon is a revealingly autobiographical figure; Annie is not merely a monster but is subtly and often touchingly portrayed, allowing hostage and keeper a believable, if twisted, relationship. The best parts of this novel demand that we take King seriously as a writer with a deeply felt understanding of human psychology. * Publishers Weekly *
A writer of excellence...King is one of the most fertile storytellers of the modern novel * Sunday Times *
One of the great storytellers of our time * Guardian *
'America's greatest living novelist' * Lee Child *
'[A] genius for storytelling' * Daily Mirror *

GOR004208385
Misery by Stephen King
Stephen King
Used - Well Read
Paperback
Hodder & Stoughton
2011-05-12
384
1444720716
9781444720716
N/A
Book picture is for illustrative purposes only, actual binding, cover or edition may vary.
This is a used book. We do our best to provide good quality books for you to read, but there is no escaping the fact that it has been owned and read by someone else previously. Therefore it will show signs of wear and may be an ex library book.