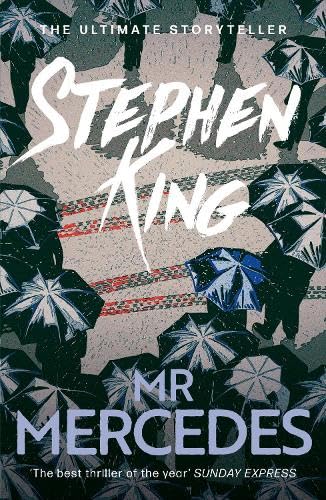 In Stock
£4.49
Described as 'the best thriller of the year' Sunday Express, the No. 1 bestseller introduces retired cop Bill Hodges in a race against time to apprehend a killer.
Very Good Good Well Read
141 in stock

Described as 'the best thriller of the year' Sunday Express, the No. 1 bestseller introduces retired cop Bill Hodges in a race against time to apprehend a killer.

A cat-and-mouse suspense thriller featuring Bill Hodges, a retired cop who is tormented by 'the Mercedes massacre', a case he never solved.

Each starts to close in on the other in a mega-stakes race against time.

Stephen King might just be America's greatest living novelist . . . THE BEST THRILLER OF THE YEAR . . . recommended to crime buffs and King fans alike. * Sunday Express *
I challenge you not to read this book in one breathless sitting * Guardian *
A thrilling cat-and-mouse game * Irish Mail on Sunday *
Enough to say that Mr Mercedes goes out not with one bang, but several - all satisfyingly unexpected. He's back with a novel different from, but as good as, anything he's previously done * The Times *
A tightly plotted crime novel that retains that essential, instantly recognisable flavour that has distinguished King's fiction...On one level, Mr Mercedes is an expertly crafted example of the classic race-against-the-clock thriller. On another, it is a novel of depth and character...rich, resonant, exceptionally readable * Washington Post *
To be held firmly by the hand, through this tough crime thriller by the assured narrative skill of Stephen King, make the act of reading an event. There should have been a sticker on the cover 'no book mark required' * Shots *
When it comes to grabbing an audience by the throat and giving them no choice but to keep reading, King has no equal, and I challenge you not to finish this novel in one breathless sitting . . . King transcends genre, and is too warm and compassionate a writer to settle for jaggedly noir suspense. * Guardian *
Expect page-turning suspense, jaw-dropping twists and all the addictive brilliance of a classic Stephen King * FHM *
Nobody can do it quite like Stephen King . . . He's a storyteller; one you'd have listened to for hours, as the sun set and the gulls cried on the dockside at Piraeus * Spectator *
King aficionados will be riveted from the first explosion of violence to the final, equally seismic climax * Financial Times *
Hypnotic and creepy, it deserves to be ranked alongside King's masterpieces * Daily Mail *
America's greatest living novelist. -- Lee Child
The most remarkable storyteller in modern American literature. -- Mark Lawson * Guardian *
King's gift of storytelling is unrivalled. His ferocious imagination is unlimited. -- George Pelecanos

GOR006642489
Mr Mercedes by Stephen King
Stephen King
Used - Very Good
Paperback
Hodder & Stoughton General Division
2015-04-23
432
1444788647
9781444788648
N/A
Book picture is for illustrative purposes only, actual binding, cover or edition may vary.
This is a used book - there is no escaping the fact it has been read by someone else and it will show signs of wear and previous use. Overall we expect it to be in very good condition, but if you are not entirely satisfied please get in touch with us.