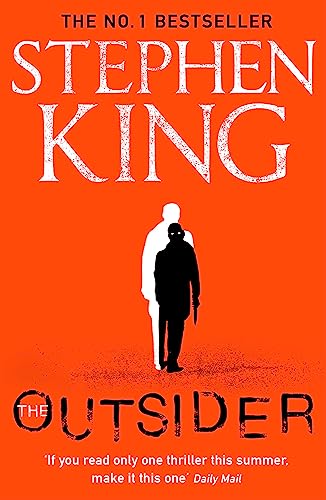 The Outsider
by Stephen King

Used Price
£3.99
New RRP £8.99
Free Shipping in the UK
'If you read only one novel this Summer, make it this one' (Daily Mail). THE OUTSIDER is a compelling and chilling suspense novel, which will delight all readers of King's crime thrillers, including the Hodges trilogy.
Very Good Good Well Read

The Outsider: The No.1 Sunday Times Bestseller by Stephen King

'If you read only one thriller this summer, make it this one' Daily Mail

Except he was seventy miles away, with an iron-clad alibi.

Detective Anderson sets out to investigate the impossible: how can the suspect have been both at the scene of the crime and in another town?

The Outsider gives King fans exactly what they want at the same time as cramming in new ideas, proving the least surprising thing of all: that his novels are as strong as they ever were * Guardian *
A crime masterpiece that has you gripped throughout * Dublin Evening Echo *
Nerve-shreddingly brilliant * Daily Express *
If you read only one thriller this summer, make it this one * Daily Mail *
King's blend of supernatural crime makes for a taut, clever read that will keep you guessing until the end * The Sun *
This police procedural morphs into a gripping, chilling supernatural thriller * Daily Record *
King is arguably as much an American icon as the '68 Fastback or a classic red and white Plymouth Fury. All of these glories are on full display in his latest mystery-horror hybrid...you're in for one hell of a ride' -- Karin Slaughter * The Washington Post *
King pulls back the layers of the everyday to show just how dangerous and threatening the ordinary world we live in case be * Independent *
Compulsive entertainment * Mail on Sunday *
So shout it from the rooftops: This new take on the old conundrum of how a man can be in two places at once is sensationally good * Sunday Express *
The Outsider is a crime masterpiece * Belfast Telegraph *
This is one of those books where you find yourself rationing the number of pages you read each night to eke it out. A very good read indeed * The Afterword.co.uk *
Mixing up genres and multiplying the surprises, The Outsider did keep me in suspense and I think that it is a really great King! * Club.StephenKing *
This chilling novel starts as a police procedural before morphing into the sort of supernatural thriller King is best known for . . . there is violence simmering below the surface of this tightly plotted yarn. * Daily Mirror *

Stephen King is the author of more than sixty books, all of them worldwide bestsellers. His first crime thriller featuring Bill Hodges, Mr Mercedes, won the Edgar Award for best novel and was shortlisted for the CWA Gold Dagger Award. THE OUTSIDER, End of Watch and Mr Mercedes all received the Goodreads Choice Award for Best Mystery and Thriller.

Many of King's books have been turned into celebrated films and television series including It, The Shawshank Redemption, Gerald's Game and Pet Sematary.

King was the recipient of America's prestigious 2014 National Medal of Arts and the 2003 National Book Foundation Medal for distinguished contribution to American Letters. In 2007 he also won the Grand Master Award from the Mystery Writers of America. He lives with his wife Tabitha King in Maine.

GOR009849666
The Outsider: The No.1 Sunday Times Bestseller by Stephen King
Stephen King
Used - Very Good
Paperback
Hodder & Stoughton
2019-05-02
496
1473676398
9781473676398
N/A
Book picture is for illustrative purposes only, actual binding, cover or edition may vary.
This is a used book - there is no escaping the fact it has been read by someone else and it will show signs of wear and previous use. Overall we expect it to be in very good condition, but if you are not entirely satisfied please get in touch with us.